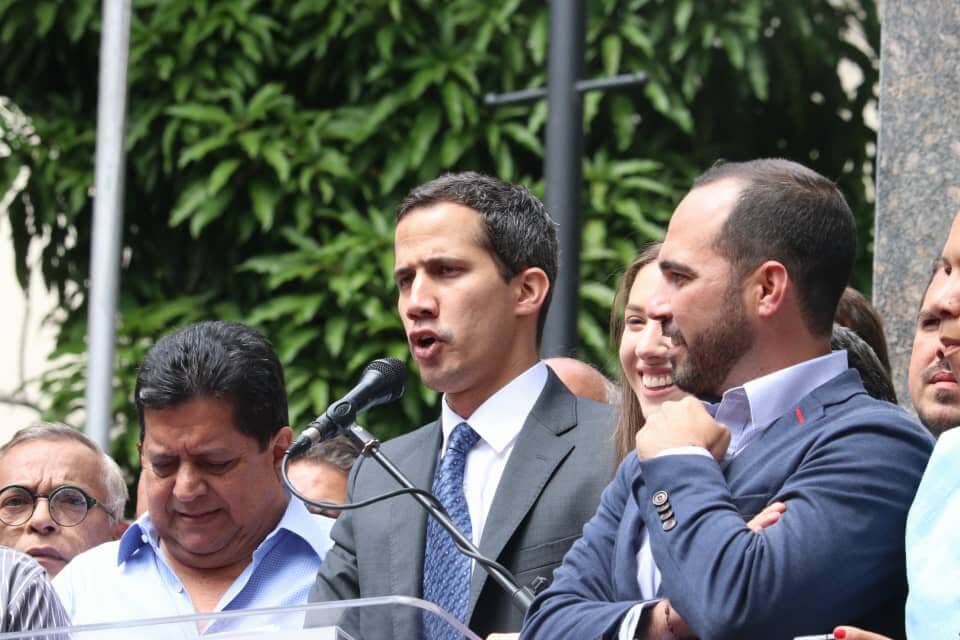 Russia, one of the main allies of Maduro’s regime, slammed what it dubbed European ‘interference’ in the oil-rich but impoverished Latin American country, saying it was an attempt ‘to legitimise usurped power’.

Already recognised by the United States, Canada, Australia and several Latin American countries, Guaido is trying to force the socialist leader from power so he can set up a transitional government and hold new elections in the oil-rich but impoverished country.

After announcing the Spanish government’s official recognition of Guaido, Prime Minister Pedro Sánchez urged the 35-year-old National Assembly head to ‘call elections as soon as possible, elections that have to be free and democratic’.

Sánchez added he wanted to spearhead a plan of humanitarian aid for Venezuela in the European Union and United Nations.

‘UK alongside European allies now recognises @jguaido as interim constitutional president until credible elections can be held. Let’s hope this takes us closer to ending humanitarian crisis,’ he said on Twitter.

‘Venezuelans have the right to express themselves freely and democratically,’ French President Emmanuel Macron tweeted.

Seven EU states had given Maduro a Sunday midnight deadline to call presidential elections or they would recognise Guaido.

But in an interview with Spanish television station Sexta broadcast on Sunday evening, Maduro said he would not ‘cave in to pressure’ from those calling for his departure.

‘Why does the European Union have to tell a country in the world that has already had elections that it has to repeat its presidential elections, because they were not won by their right-wing allies,’ said Maduro, interviewed in Caracas.

‘They are trying to corner us with ultimatums to force us into an extreme situation of confrontation,’ Maduro said.

However, he supported plans for a meeting of Latin American and EU states in a ‘Contact Group’ meeting in Montevideo next Thursday.

And he called on Guaido for ‘face-to-face’ talks, which the latter has already rejected.

Under Maduro’s stewardship, oil-dependent Venezuela has lurched into an economic crisis that has left the country suffering from hyperinflation and shortages of food and medicine.

The situation has long been denounced by the opposition and Guaido stunned the world on 23 January when he declared himself acting president at a rally, declaring Maduro’s presidency ‘illegitimate’ and founded on flawed elections.

He began to exercise authority for the first time this weekend, calling on the army to allow in humanitarian aid to a nation wracked by economic crisis.

Guaido is expected to announce a date for the arrival of humanitarian aid from the US – a path Maduro believes will lead to a US-led military intervention.

Guaido says up to 300,000 people are ‘at risk of death’ in Venezuela for want of humanitarian aid.

In Washington, US President Donald Trump warned that military intervention remains ‘an option’ for dealing with the crisis in Venezuela.

All eyes are now on Venezuela’s military, which has so far been Maduro’s main pillar of support, but there have been signs of unrest in the ranks.

Earlier Sunday, Maduro addressed troops on military exercises in Venezuela’s coastal northeast, calling on them for ‘maximum cohesion’ a day after a top Air Force general publicly sided with Guaido.

Tens of thousands of people turned out Saturday for competing shows of support for Guaido and for Maduro who was sworn in on 10 January to a disputed second six-year term.

During the protest, Guaido announced the installation of collection centres for medicine and food – items lacking in Venezuela – in neighbouring Colombia and Brazil.

Speaking at a pro-regime demonstration marking 20 years since his predecessor Hugo Chavez came to power, Maduro reiterated his call to bring forward elections for the opposition-held national assembly.

Guaido has called for a new demonstration on 12 February, and another protest to push for the entry of aid.

Forty people were killed in clashes with security forces in the week of protests coinciding with Guaido’s self-proclamation as acting leader, with hundreds more arrested, according to the United Nations.

The 14-nation Lima Group – made up of Canada and Latin American countries – meets in Ottawa on Monday. Eleven of its members have recognised Guaido.