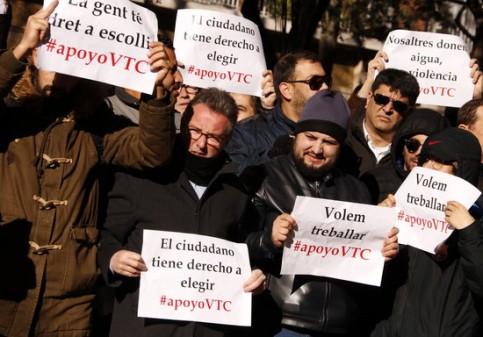 Drivers for ridesharing apps like Uber and Cabify in Barcelona could be willing to accept a minimum booking time of 15 minutes in advance for their services, but reject having the one-hour wait time the new Catalan government bill will entail.

While the new government regulation will set a minimum pre-booking of 15 minutes for ridesharing applications, it also allows for municipalities to set additional times if they see fit – a new addition as a result of the recent taxi strikes.

Barcelona officials have stated they plan to lengthen the necessary wait time to one hour, which rideshare drivers denounce.

On Monday, representatives of the sector met with the territory minister Damià Calvet, who said the regulation will go ahead and be approved on Tuesday, but that a new bill is in preparation that takes ‘all parties’ into account.

Barcelona’s taxi drivers recently went on strike over the government’s regulation of ridesharing services, which they argued did not place enough restrictions on their competitors.

Since taxi drivers went back to work after the government made concessions, ridesharing drivers have been protesting the regulation, saying it could mean the closure of companies and the loss of jobs.

Ride-hailing drivers and the companies they work for will now discuss the minister’s proposal and will consider lifting the protest should they accept it.

‘The intention is not for us to disappear but rather to coexist [with taxis] and work in an orderly way,’ said one of the drivers who met with Calvet, María José Delgado, who also said she had been convinced by the government’s ‘willingness’ to find a solution.

Warning that a future bill to regulate the sector ‘will not be immediate’, Delgado said ‘it will be a regulation with pros and cons but one that addresses the needs of the user, the ridesharing drivers and the taxi sector.’

For their part, sources in the government said the meeting had been ‘cordial’ and that it had served to ‘exchange points of view about the regulation’.