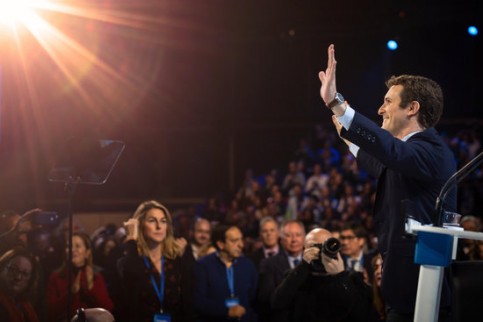 ‘We will free a whole society, which has been kidnapped by a gang of fanatic, supremacist racists,’ he said on Sunday.

Casado believes he will ‘soon’ be the prime minister of Spain, and then he will change the Spanish political parties funding law so that ‘those who act against Spain receive no euros’.

He also pledged to modify the law regulating pardons ‘so that any pardon to people convicted for rebellion and sedition is prohibited’, in reference to the nine pro-independence jailed leaders whose trial for rebellion will kick off in the coming weeks.

Casado’s view was endorsed by José María Aznar, the former Spanish prime minister between 1996 and 2004, who still enjoys a big influence over the party.

Aznar said that the People’s Party will not accept that ‘those who plot against the interests of Spaniards’ have any influence for the fate of the state.

‘How much more time do we have to wait to dismantle the coup d’etat against democracy?’ asked Aznar, referring to the independence movement.

These remarks, together with calls by Spain’s right-wing parties and Extremadura’s parliament to reintroduce direct rule over Catalonia from Madrid, have been rejected as ‘big nonsense’ by the Catalan president Quim Torra’s group Junts per Catalunya (JxCat).

‘Leave Catalonia alone, leave our rights and freedoms alone, don’t play with an artifact which has seriously damaged us,’ said JxCat spokesman Eduard Pujol, referring to the possibility of direct rule again as ‘big nonsense’.