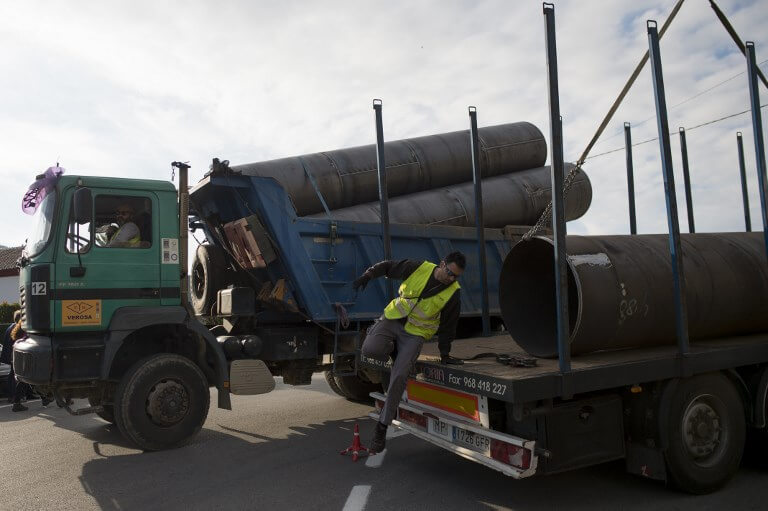 Diggers trying to reach a two-year-old boy who fell into a deep well in southern Spain a week ago saw their progress slowed by harder rock on Sunday, though experts still held out hope he could still be alive.

There has been no contact with Julen Rosello since he fell down the narrow shaft, some 100 metres deep, on 13 January while playing as his parents prepared a picnic nearby in the town of Totalan near Malaga.

After abandoning an initial plan to reach the boy with an angled tunnel because of repeated collapses and landslides, workers turned to the possibility of drilling a vertical shaft parallel to the well.

When they reach a depth of 60 metres, a team of eight expert miners will be lowered down the shaft to start digging a horizontal tunnel to the location where they believe the toddler is.

But the new effort slowed as diggers hit hard granite and rescuers now expect they will only complete the vertical shaft ‘at the end of the night’ if they are able to keep working at the same pace, engineer Angel Garcia Vidal who is overseeing the operations, told reporters late on Sunday.

‘We continue to work intensely, nonstop, and we hope to reach our desired goal very soon,’ he added.

The authorities are ‘doing everything that is humanly possible’ to rescue the boy, Juanma Moreno, the newly elected president of Andalusia, told reporters.

‘But the circumstances are not helping. I hope and trust that tomorrow, Monday, we will have some positive news. But it will depend on the nature of the ground,’ he added.

Rescuers used probes to explore the bottom of the well that came back with strands of hair matching the child’s DNA, as well as a bag of sweets that he was carrying when he went missing, providing confirmation that he is down the hole.

Experts told Spanish media that there are slim chances that Julen could still be alive, explaining that cold weather slows a body’s metabolism, so it needs less energy and can survive with abnormally low breathing and blood flow.

‘The cold has a double edge. On the one hand it’s negative, because it can cause multiple consequences. But in this case we all hope for its better outcome: with it you gain time to survive because at lower temperatures the human metabolism slows and tissues are preserved,’ Ivan Carabano, a paediatrician at Madrid’s Hospital 12 de Octubre, told the El Pais daily.

There have been cases similar to Julen’s in which a person survived 10 days in a semi-conscious state that needed less oxygen, the head of the Andalusian Federation of Speleogy, Jose Antonio Berrocal, told reporters in Totalan last week.

Spanish media, which have been covering the unprecedented rescue operations round-the-clock, have reported that Julen’s parents lost another child, aged three, in 2017. The child had cardiac problems.

‘I believe in God, I am sorry to say this but He has been very unfair to us,’ Julen’s paternal grandmother Maria Carmen said during an interview on private television Antena 3 last week.

Officers have questioned both parents and an entrepreneur who dug the well, a police spokesman said Saturday, adding that this was routine in such investigations.

This race against time recalls several other high-profile cases in the 1980s.

Alfredo Rampi, an Italian boy, was found dead in a well near Rome in 1981 while Jessica McClure, an 18-month-old girl, was rescued alive from a well in Texas in October 1987 after more than two days inside.

Spain votes to extend lockdown to 9 May. Children to be allowed out