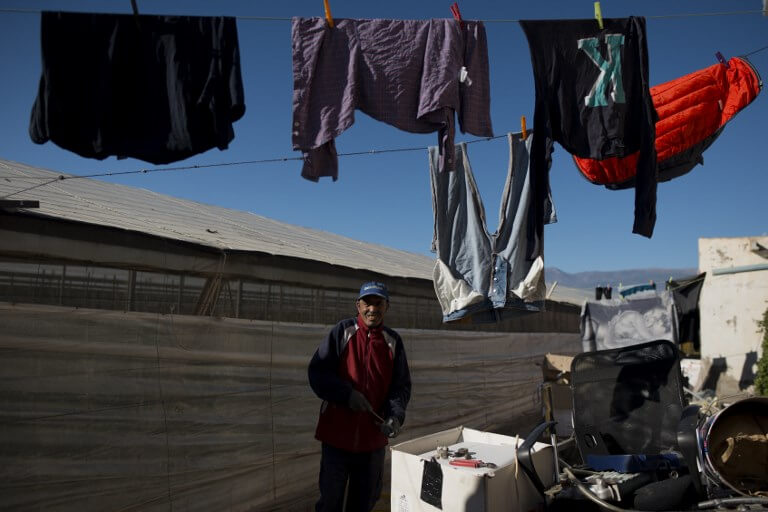 In southern Spain, the far-right party Vox has drawn farmers’ votes with a pledge to deport illegal workers.

‘But I don’t know what they would do without us,’ an African man remarked as he left a greenhouse in El Ejido.

In this part of the sprawling region of Andalusia dubbed the ‘sea of plastic’, shimmering greenhouses lie side by side for miles on end.

This is where Vox got its best results in recent local elections that have led to it sitting in a regional parliament for the first time in modern Spanish history.

And while it did not get enough votes to govern, the support of 12 Vox lawmakers has allowed a conservative-liberal coalition to take power in Andalusia.

One of the mainstays of the far-right party’s programme is a call for illegal immigrants to be denounced and deported.

But in this area of southeastern Spain, dubbed ‘Europe’s vegetable garden’, foreign workers are an integral part of the ultra-intensive farming that the regional economy depends on.

Riding his bicycle along roads lined with greenhouses, Issa Guebre, 24, says he is paid 36 euros per day to grow melons.

He arrived last year from Burkina Faso after climbing the tall fence that separates the Spanish overseas territory of Melilla from Morocco.

Guebre says his boss ‘has never asked’ him for any identity documents and that he has never seen a work inspector.

Asked about Vox’s call to deport all illegal workers, he says: ‘I don’t know how they would cope here without us Africans.’

‘In the summer it’s so hot in the greenhouses at 50 degrees (120 degrees F) that even the owner doesn’t come in.’

A Senegalese man who lives in Andalusia, Serigne Mamadou Keinde Diassaka, recently drew attention when he published on Facebook a video seen more than 600,000 times.

Responding to Vox at six in the morning in a vineyard in Albacete, he said: ‘Here’s what we immigrants do: work.’

Vox could even win municipal elections in May, polls show.

Beyond immigration, the typical Vox voter is outraged by the independence drive in northeastern Catalonia or by the recent feminist movement.

A slogan painted in red on a greenhouse illustrates the anger directed at Spain’s Socialist prime minister who wants to exhume the remains of dictator Francisco Franco from his mausoleum near Madrid.

‘Recruiting those who show up’

At the Las Chozas bar, farmers picking at tapas or playing table football say ‘many voted for Vox’ and ‘illegal workers should go.’

He says immigrants ‘ask for more than they should because they come from a third-world country but don’t want to follow the rules here.’

He points for instance to those who won’t eat pork at the canteen.

But he also admits that ‘without immigrants here, you can’t survive.’

‘When you have to harvest 70,000 kilos of watermelons in 24 hours, you hire those who show up,’ says Salvador, a 64-year-old who refused to give his surname, acknowledging he sometimes hires illegal workers.

Smoking a cigarillo, the land owner, his face deeply lined, nevertheless said he is ‘sensitive to Vox’s discourse.’

According to Jose Cueva of the SOC Farmworkers Union, ’20 to 30 percent of (farm) workers are illegal’ in the province of Almeria, one of eight in Andalusia.

In El Ejido, employers gather illegal workers early in the morning ‘with total impunity’ next to the police station, he says.

‘They would be shooting themselves in the foot: the deportation of illegal immigrants would create a big shortfall in workers,’ he adds.

Pointing to the farmers’ ‘contradictions,’ he believes they ‘need these workers’ as their low-cost production ‘wouldn’t be possible without widespread precarity.’

‘El Ejido’s former PP mayor Juan Enciso had in 2000 summed up their thinking by saying they needed immigrants by day but that they should disappear at night.’