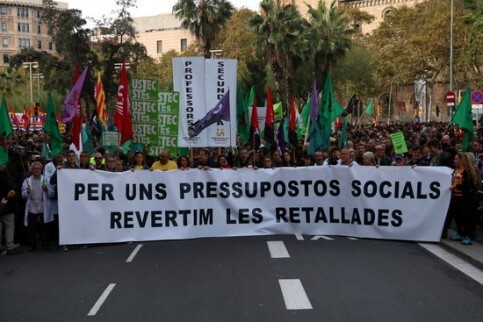 Students, teachers, and public administration workers also took to the streets to protest in Barcelona at midday on Thursday, as medical staff in primary healthcare continued their week-long strike.

As the unitary protest of students, teachers, and public administration workers took off in Barcelona, further rallies for education and medical sectors were widespread across Catalonia.

Some student protestors cut one of the Catalan capital’s main roads, Avinguda Diagonal, whilst others blocked the access to the Autonomous University of Barcelona (UAB).

The common demands for the protests are better conditions in the public sector.

While doctors want a maximum of 28 daily visits in order to spend at least 12 minutes with each patient, the Catalan Health Institute (ICS) rejects setting any limits.

As for students, they are demanding a 30% reduction in tuition fees. While the measure was approved by MPs in the Catalan parliament in 2016, it has yet to be implemented.

Teachers in primary and secondary schools are demanding that the government ‘reverse’ the cuts applied during the financial crisis.