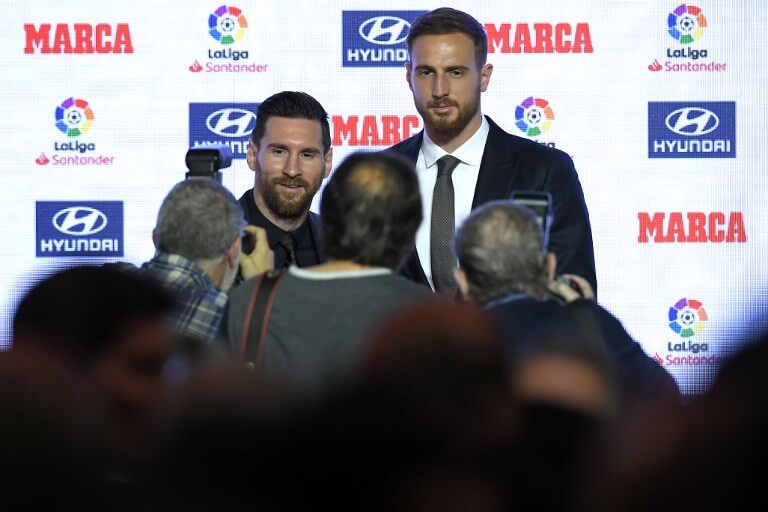 Atletico Madrid have an opportunity to take advantage of a topsy-turvy La Liga campaign when they host champions Barça on Saturday, with the chance to take top spot this despite their own patchy form.

Diego Simeone’s side are just a point behind leaders Barcelona despite having drawn five times and lost once, together as many matches as they have won. They are battling to overtake Barça alongside Sevilla and surprise package Alaves, who are both level on 23 points with Atleti.

Alaves, promoted in 2016, finished 14th last term but will go top if they win away at Leganes on Friday night, while Sevilla could potentially be leaders on Sunday night despite languishing in 13th place in September.

Even Real Madrid are in touch, just four points back despite having gone more than eight hours without a goal at one point and having been without a permanent coach for two weeks before Santiago Solari was upgraded from interim to full-time boss.

This season every time a challenger has clicked into gear they seem to click out again, in turn offering fresh impetus to their stumbling rivals around them.

Barça were verging on crisis in September before reeling off six wins and a draw away at Valencia. Then they were blown away by Real Betis, flattered even by the 4-3 scoreline.

‘We have managed to play the way we want against the big teams, but against other teams with less potential we have not,’ defender Gerard Pique said.

‘If we want to win titles we have to be strong against everyone, the difficult ones and everyone else.’

Atletico may have put a miserable start behind them but last month, they suffered their heaviest defeat under Diego Simeone, a 4-0 loss to Borussia Dortmund. Before the international break, they needed two goals in the last 10 minutes to beat Athletic Bilbao.

The last time Atleti prevailed over Barça in the league was 2010, when they had Spain keeper David de Gea in goal and Argentina striker Sergio Aguero up front.

Lionel Messi proved the difference in March with a bending free-kick, and in the summer too for Antoine Griezmann, who decided he would be better off in the lead role he holds with Atletico rather than playing second fiddle at Barça.

Griezmann has not shied away from his craving to clinch the Ballon d´Or this year but despite winning the World Cup and Europa League, the sense is he will come up short, as he is not consistently dominating these kind of fixtures in the way players like Messi do.

There will be a battle of old against new in midfield, where Sergio Busquets, 30, goes up against Rodri Hernandez, eight years his junior.

Rodri is still rough around the edges but has poise, judgement and the ability to set the tempo. Busquets has done that job at the highest level over the past decade but he has been among those most at fault in Barça’s worst performances this season.

Any result at the Wanda Metropolitano will benefit sixth-placed Real Madrid, whose first game with Santiago Solari as their permanent coach comes at Eibar early Saturday afternoon.

Four wins, 15 goals scored and only two conceded point to nothing less than a transformation, which gave Madrid president Florentino Perez an easy solution to fill the vacancy left open by the sacking of Julen Lopetegui.

Solari has a kind run of fixtures until Christmas, broken only by a league clash against Valencia and Roma in the Champions League next week, which gives his side the chance to re-emerge as serious challengers to Barça’s crown.