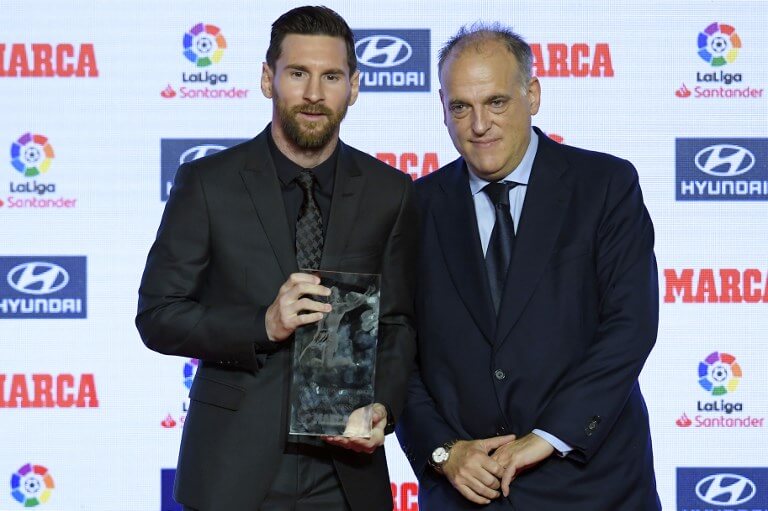 Tebas said PSG should be expelled for at least ‘one year’ after recent leaked documents implicated the French champions in violating financial rules.

The latest developments follow on from an investigation in 2017 which looked into the $264 million signing of Neymar from FC Barcelona.

In September, European football’s governing body UEFA said it had referred the accusations against the French giants to its financial unit ‘for further investigation’.

Manchester City, who are yet to be investigated by soccer’s European governing body, have also angered Tebas after they were accused of illegally obscuring spending following widespread reports of findings from the Football Leaks website.

‘Two years we started talking and complaining about cheating, they should have already done things,’ Tebas told AFP at the Soccerex conference in Miami on Thursday.

‘Football Leaks has shown that UEFA have not done the right thing. And with the information we have now, the clubs must be sanctioned.

‘For PSG, because of their recurring issues, they should be pushed out of the Champions League for at least one season.

‘It’s not my objective to have them kicked out. The objective is that people follow the rules and stick to FFP.’

Nasser Al-Khelaifi, the PSG President, has dismissed any allegations of wrongdoing and rejects claims about attempting to avoid serious FFP sanctions.

Both the Qatari-backed PSG and Abu Dhabi-owned Manchester City reached settlements with the UEFA Club Financial Control Body in May 2014 following breaches.

‘I don’t know as much about Manchester City and they haven’t been looked at as closely by UEFA. But with PSG it’s clear they haven’t shown the real numbers in regards to their sponsorships and so their sanction should be exclusion from the Champions League.’

Manchester City officials maintain their innocence and stress the Football Leaks revelations are an attempt to rubbish their name in world football.

‘There should be an investigation into Manchester City by UEFA to see if what has emerged from Football Leaks is true,’ countered Tebas, who remains confident his plans of staging a La Liga game in Miami between Barcelona and Girona early next year will come to fruition.

‘What PSG has done is inflating the value of their sponsorships, City have done something similar but in smaller amounts. They are using the structure of the City Football Group (CFG) to hide losses,’ Tebas said.

‘People need to follow the rules. In any economic sector, whenever money is coming that isn’t based on market value, it inflates prices and that inflation harms football.’

Tebas insists a court hearing concerning the La Liga game slated for January 26th at Hard Rock Stadium, home of the Miami Dolphins NFL team, will be settled in the coming weeks.

Real Madrid are against the plans but Tebas isn’t worried.

“I am confident,” he said. “It is just one game we are talking about.”