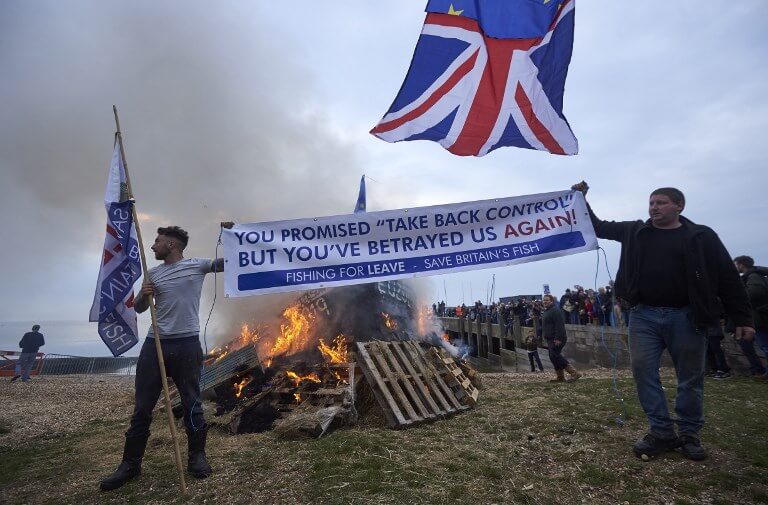 Access to national waters and catch quotas are technical but can be emotive in Britain and some bloc members. Despite their absence from the draft deal they remain potential minefields as the two sides try to finalise divorce terms.

As May battles to salvage her plan amid fierce domestic opposition, some EU states – France, the Netherlands and Spain – are said to be concerned it relegates fishing to post-Brexit talks over the future relationship.

‘There remains a risk of further stumbling blocks arising between now and an extraordinary EU leaders’ summit scheduled for November 25,’ said the Eurasia Group think-tank.

‘The issue of fishing rights, if it has not been pushed into the future relationship discussion, also has the potential to foul up the deal even at this late stage.’

May has vowed Britain will leave the EU’s Common Fisheries Policy after Brexit and negotiate as an independent coastal state.

But under the tentative agreement between London and Brussels, that will only happen after a transition period scheduled to end in December 2020.

British fishermen are furious they will have to continue obeying bloc rules during these 21 months, including much-despised quotas and allowing European vessels’ access to UK waters.

‘The transition still means obeying all EU law, allowing the EU to enforce detrimental laws to massacre what’s left of the British fleet,’ said the pro-Brexit Fishing for Leave group.

It called the draft deal a ‘capitulation’ and urged British lawmakers to reject it in favour of leaving without an agreement.

Other professional industry bodies gave it a more cautious welcome.

The National Federation of Fishermen’s Organisations, said the agreement ‘was an extremely important first step towards a new future for the UK as an independent coastal state’.

‘Further challenges lie ahead in securing the actual access arrangements and quota shares consistent with that new status,’ it warned, however.

Some fisherman fear that is when May will agree to Brussel’s demands that EU vessels continue to enjoy access to UK waters in return for seafood suppliers’ selling to the bloc tariff-free.

A leaked diplomatic note reportedly from EU deputy negotiator Sabine Weyand, obtained by The Times this week, said Britain ‘would have to swallow a link between access to products and fisheries in future agreements’.

Under current rules EU vessels can fish within six and 12 nautical miles of the UK coastline, while Britain’s fishing industry relies heavily on exporting its catch to Europe.

‘It was always going to happen,’ Andrew McLeod, a trawler captain in southwest England, told AFP on the likely compromises coming.

‘The best I ever thought we’d get out of it was to keep foreigners outside our 12-mile limit,’ he added.

‘It wouldn’t surprise me if even that didn’t happen.’

Environment minister and leading Brexiteer Michael Gove last month unveiled fishing legislation he vowed would take back control of waters and hand ‘more powers than ever’ to fishing-reliant Scotland.

‘The industry’s priority has always been taking back control of decision-making over who catches what, where and when in our waters,’ he said.

‘Any linkage between access and trade contravenes all international norms and practice and is simply unacceptable in principle.’

Such worries are shared by May’s 13 Scottish Conservative MPs.

They wrote a letter to the prime minister earlier this week warning they could not back a deal that prevents Britain from independently negotiating access and quota shares.

Scottish Secretary David Mundell later said May, who needs every vote she can get to win parliamentary approval for her plan, had convinced him to support it.

‘I was content to move to the next stage of the process on the basis that Brexit will deliver for our fishing industry,’ he added.