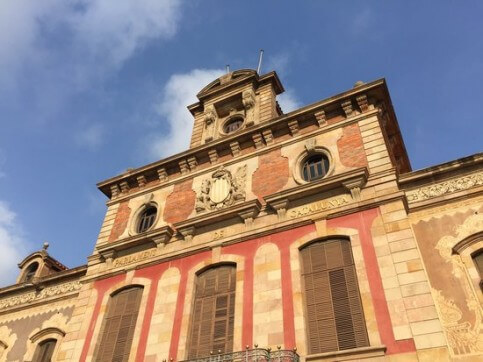 On 27 October 2017, pro-independence parties in Catalonia defied Spain and declared independence after a heated debate in parliament -a move that was immediately blocked and which triggered unprecedented retaliatory measures from Madrid.

A year on, the first anniversary of the independence declaration is being overlooked by the very actors who carried it out.

Neither the Catalan government nor any pro-independence party, are planning to hold any ceremony on Saturday, with the Catalan National Assembly (ANC) grassroots group being the only one to remember it.

The ANC has called on its followers to demonstrate and to demand president Quim Torra publish the declaration of independence in the Official Gazette of the Government of Catalonia (DOGC).

It’s less than likely that Torra, a pro-independence activist turned politician, will concede to such a request. Instead, he is expected to attend the foundational convention of the Crida Nacional, a platform aiming to bring pro-independence supporters together, led by former president Carles Puigdemont from his exile in Belgium.

The political gathering will take place in the town of Manresa, in central Catalonia, near the prison where five pro-independence leaders are being held in pre-trial jail for the very events that took place a year ago.

While the independence declaration was seen as an ultimate act of defiance, its importance has subsequently been downplayed, as it became obvious that secession had not actually come about.

In recent speeches, Torra has repeatedly highlighted the importance of the 1 October referendum, carried out despite Spain’s opposition, as well as a major demonstration on 3 October to condemn police violence against voters. References to the declaration of independence are less common.

On 27 October, the Spanish government, led by the conservative Mariano Rajoy, triggered article 155 of the constitution to sack Puigdemont and all his ministers, impose direct rule in Catalonia, and call fresh polls.

Despite having their most senior leaders either in prison or abroad, pro-independence parties won the election and held on to a narrow majority in parliament that allowed them to stay in power.

Tensions between Catalonia and Madrid remain high despite recent leadership changes on both sides – yet, the case against pro-independence politicians and activists has significantly overridden separation from Spain as the main preoccupation of pro-independence parties.

Barcelona City Council: no to monarchy

Messi absence a disaster for his fanatical fans