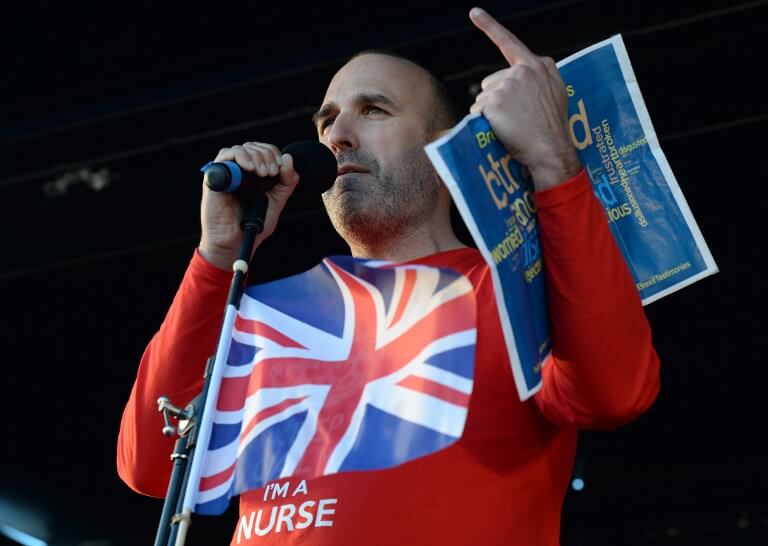 Keeping a watchful eye over one patient for a 12-hour shift at the hospital where he learned his trade, Manuel Gala says Brexit has forced many Spanish health workers to consider their future in Britain.

‘A critical patient is never left alone here, at any time, so obviously a lot of staff are needed,’ explained the 33-year-old Majorcan, who has been working in Oxford’s university hospitals for six years.

A short corridor separates his unit from the emergency room at John Radcliffe Hospital, a modern seven-storey structure some 2 miles (3 km) from the gothic buildings that house the city’s centuries-old university colleges.

In less than five minutes, the victim of an accident can move from an ambulance, to A&E, to one of the intensive care beds.

Gala and his team of nurses – which includes Australians, Filipinos, Indians, Italians, Poles and Portuguese, as well as Britons – then keep them under constant observation.

The international team reflects Britain’s drive to recruit foreign workers over the last two decades due to a shortage of native staff.

Around 63,000 (5.6%) of the 1.2 million people employed by Britain’s public health service come from the European Union, according to data from the National Health Service (NHS).

Spain represents the second highest number of NHS nurses from the EU behind Ireland, but many workers have decided to leave Britain after it decided in a 2016 referendum to leave the bloc.

NHS Spanish staff has decreased from 7,240 to 6,160 – a fall of 15% – since June 2016, the only EU nationality that has recorded a fall, according to a parliamentary report published this month.

Spaniards can currently accrue points from their work in Britain that can later be used on Spain’s public health job exchange.

But ‘we fear that after Brexit this will not continue and that has caused many people to stop coming and others have decided to leave,’ said Gala.

‘You feel you don’t belong’

Lara Garrido, a 34-year-old dentist who left Spain in 2010 due to job insecurity, has already gone home.

‘It took me exactly two days to find a job as a dental nurse (…) and in three months I started working as a dentist,’ she recalled of her time in Britain.

She earned the respect of her patients and colleagues during her three years working in a small town in Essex, southeast England, but was then rocked by the Brexit vote.

‘I was happy and aware that in Spain it would be very difficult to find a similar job. And then came Brexit,’ she said. ‘My whole clinic voted out. It’s very hard for your own patients to tell you about Brexit in a way that doesn’t make you feel you don’t belong, that you’re always going to be a foreigner,’ Garrido said.

She and her husband returned to Spain in February, after having their first baby, worried about the political uncertainty.

Others, however, have put down deeper roots.

‘I have three English children, my ex is English and my current partner too,’ said Joan Pons Laplana, a 43-year-old nurse.

‘All my life is here and now they tell me ‘go home’, but this is my home.’

He arrived following the first wave of recruitment campaigns 18 years ago and now claims to feel ‘betrayed’.

Pons Laplana recently received a job offer in Australia offering double the salary, but his family do not want to move.

The Basque autonomous government is one of many bodies trying to capitalise on the disillusionment, launching the Bizkaia Talent programme in London this month, which offers 15 % tax reduction for five years as one of its inducements to come home.

‘With Basques and EU nationals increasingly considering relocation, we’re hoping to tap into their interest and draw their skills to the Basque region,’ said managing director Ivan Jimenez.

An exodus could be catastrophic for Britain’s NHS, warned Siva Anandaciva, an analyst at the King’s Fund health charity in London.

‘At the moment you already don’t have enough nurses and doctors to meet the demand that is coming through the door, and demand is just continuing to increase,’ he said. ‘This is only making it harder and harder to deliver high quality care, just at a time when we need more.’