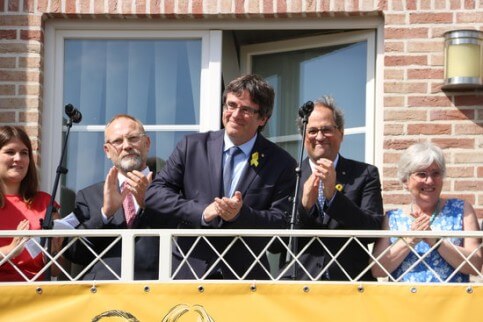 The Council of the Republic, the private body led by former president Carles Puigdemont to make the case for Catalan independence from abroad, will be officially presented at the Catalan government headquarters in Barcelona on 30 October.

The announcement was made after a top-level meeting in Waterloo (Belgium) between pro-independence leaders, including Puigdemont himself, president Quim Torra, and Sergi Sebrià, the leader of Esquerra Republicana (ERC) in the Catalan parliament.

The organisation will include members of major pro-independence parties and grassroots organisations, with the exception of the far-left CUP party, which dismissed the body as a symbolic solution’ to ‘beat around the bush’ and ‘avoid facing the real problem’.

Torra stated that the Council of the Republic is a ‘key piece’ of the project to achieve independence, and pledged to work in order to include CUP in the upcoming launching of the project.

‘This project belongs to the pro-independence majority [in parliament], and I always included our colleagues from CUP. We hope we’ll be able to convince them that they need to be here,’ said Torra.

Puigdemont first announced the creation of the Council of the Republic last February, when he pledged to focus on raising awareness of Catalan independence at the international level after Spanish courts prevented him from reclaiming his post at a distance.

Puigdemont and Toni Comín, an MP for ERC, were charged with creating the Council of the Republic from abroad. Yet, preparations were interrupted when the former president was detained in Germany while traveling, following an extradition order that was later withdrawn by Spain.