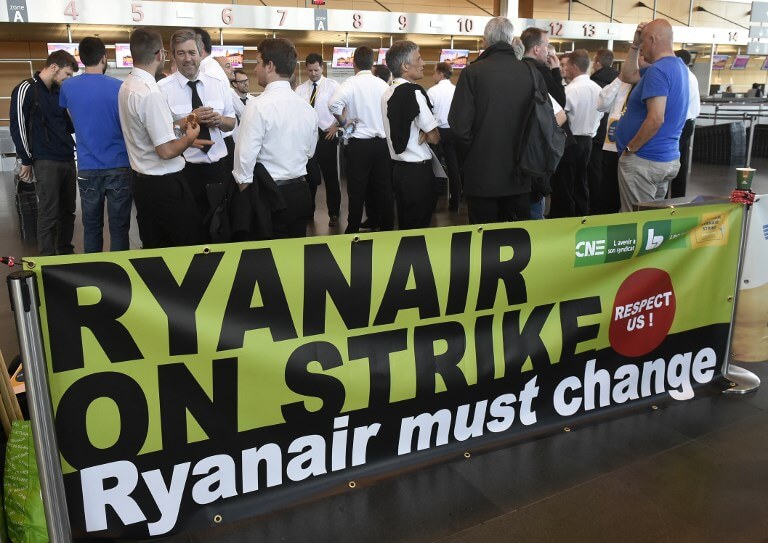 In a statement, the Irish firm maintained its net profit estimate for its current financial year to March 2019 of €1.1-1.2 billion – down 12% – owing to two pan-European strikes that forced it to cancel hundreds of flights.

Ryanair said this forecast – which it had cut earlier this month – reflected ‘higher fuel, staff and EU261 costs’ — referring to EU legislation which mandates passenger compensation in cases of delays or flight cancellation.

‘While ancillary revenues performed strongly, up 27%, these were offset by higher fuel, staff and EU261 costs,’ said CEO Michael O’Leary.

‘Our traffic, which was repeatedly impacted by the worst summer of air traffic control disruptions on record, grew 6%.’

Ancillary income – including revenue from food, drink and in-flight sales – grew 27% to €1.3 billion over the six months to September period.

A substantial factor in this increase was the change in the baggage system at Ryanair, which now requires passengers to buy priority boarding for the right to take a small suitcase inside the cabin.

Overall, the company registered an 8% rise in revenue to €4.79 billion, but only 75% of Ryanair flights arrived on time in the first half, compared to 86% a year earlier.

Ryanair said it suffered from eight days of strikes over the summer.

‘We worked well to minimise disruptions to our customers by operating over 90% of our schedules on each of these days,’ the firm said in its statement.

On Friday, Ryanair said it had reached agreements with more unions across Europe as it looked to avoid yet more strike action.

Ryanair pilots across Europe staged a 24-hour stoppage in September to further demands for better pay and conditions, causing chaos for tens of thousands of passengers.

A major issue among staff based outside Ireland remains the firm’s practice of using Irish legislation in employment contracts.

Employees say the status quo creates insecurity for them, blocking access to state benefits in their own countries.