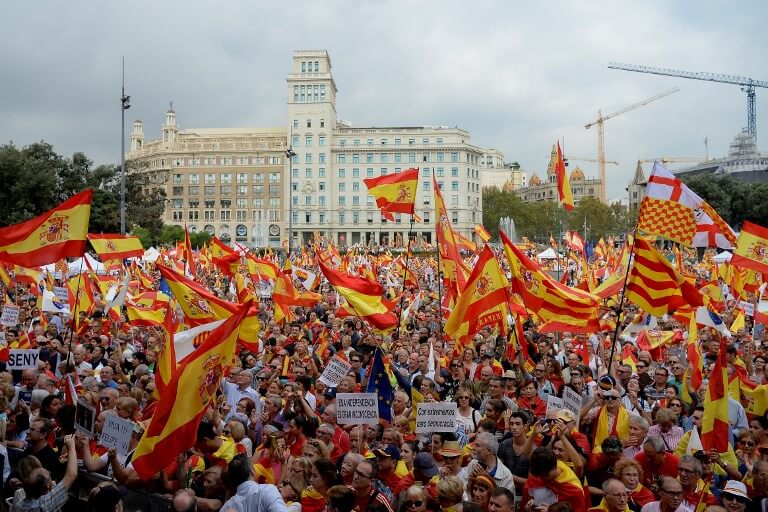 A rally held in central Barcelona on Thursday in support of Spain’s National Day, the Dia de la Hispanidad (or Hispanic Day) was attended by some 65,000 people, according to the municipal police. Organisers claimed that 300,000 people attended the demonstration. 12 October celebrates Christopher Columbus‘ arrival in the New World. The day was declared Spain’s National Day in 1987.

In Barcelona, 65,000 people rallied to remain part of Spain and in protest against leaders who brought the region to the brink of independence last year.

While supporters of independence have staged massive rallies in recent years, those who want the wealthy northeastern region to remain a part of Spain have remained largely silent.

But that changed after Catalonia’s regional government in October 2017 pressed ahead with a banned referendum on secession and the regional parliament then declared the region’s independence to no effect.

Sixteen Catalan separatist leaders, including Puigdemont who is in self-imposed exile in Belgium, are facing trial over their role in the separatist push. The trial is expected to start in early 2019.

‘I ask that the judges who will have to issue sentences soon not be intimidated,’ said Javier Megino, the vice president of the group which organised the demonstration, ‘Spain and Catalonia’, in an address to the crowd.

‘Puigdemont to prison,’ the crowd chanted in response.

Speaking to attendees, Javier Megnio, said they were ‘legal and loyal’ to the constitution. He vindicated the ‘dignity’ of those Catalans who also feel Spanish, and stressed that ‘nobody can deny us the pride of being and feeling Spanish’. He demanded respect for ‘our institutions, our king, our flag’.

Carles Puigdemont was replaced by Quim Torra as Catalonia president following snap polls in the region in December 2017 which saw separatist parties once again win an absolute majority in the regional parliament.

Torra’s government is divided between those who back disobedience to advance the cause of independence and those who favour dialogue with new Spanish Prime Minister Pedro Sánchez.

In power since June, Sánchez has taken a softer line on Catalonia then his conservative predecessor – a stance which many at the demonstration criticised.

Manuel Miró, a member of Societat Civil Catalana (SCC), one of Catalonia’s largest unionist organisations, told Quim Torra that ‘Catalonia doesn’t deserve a president’ like him, as he only rules for ‘a fraction of Catalans’.

The motto of the rally was ‘Barcelona, guarantor of the Spanishness’, and was attended by unionist parties, such as Ciutadans (Cs) and the People’s Party (PP), as well as by far-right parties and organisations like Vox, Plataforma per Catalunya (PxC) and Somatemps.