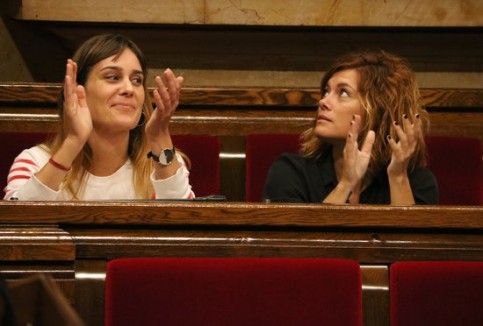 The Spanish government threatened ‘legal measures’ on Thursday after the Catalan Parliament passed a motion condemning the role of King Felipe VI in the independence bid, as well as demanding the abolition of the monarchy.

The government led by the Socialist Pedro Sánchez said the resolution was ‘politically unacceptable’ and accused pro-independence parties of using Catalan institutions to ‘exacerbate the conflict’ and fail to serve the general interests of the Catalan population.

Pedro Sánchez has until now trodden carefully as he negotiates with Catalan president Quim Torra in a bid to ease the situation in the region where roughly half of the population supports independence.

But on Thursday, he tweeted that ‘the resolution voted this afternoon in Catalonia’s parliament that wants to reject and condemn the head of state is unacceptable’.

‘This government will adopt the legal measures at its disposal to defend the law, the constitution and state institutions,’ he added, without specifying what the measures would be.

In a statement, the Spanish government added that the resolution was ‘a product of the loss of direction of separatist groups which, inexplicably, got the support of another parliamentary group’.

The motion was proposed by the left-wing coalition ‘Together we Can’, Catalunya en Comú-Podem (CatECP), ‘Together we Can’, and passed with votes from Junts per Catalunya (JxCat) and Esquerra Republicana (ERC), the two main pro-independence parties and government partners.

The parties that voted in favor of the motion criticised Felipe VI for his speech on 3 October 2017, in which he took on the Catalan government for organising a referendum on independence deemed illegal and made no mention of police violence against voters.

The resolution also reassured support for ‘republican values’ and abolishing ‘an outdated and anti-democratic institution like the monarchy’.

Without En Comu Podem, however, Catalonia’s separatist government is in minority in the regional parliament due to a rift between two major pro-independence parties, casting doubt over the executive’s viability.

This is a major change from December 2017, when separatist parties got an absolute majority in snap regional elections called by then prime minister Mariano Rajoy after the failed secession bid in October.