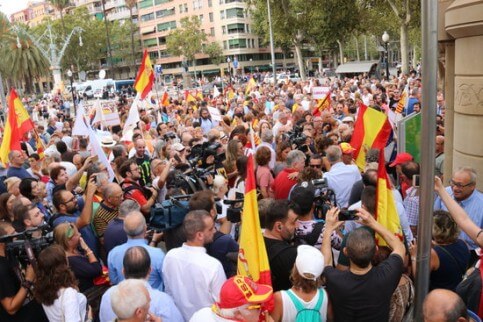 Three individuals at a protest in support of the removal of yellow ribbons attacked a cameraman for Spanish public broadcaster TeleMadrid, mistakenly identifying the channel as Catalan TV3. The incident occurred just minutes before the protest began at 7pm on 29 August, when individuals began punching and kicking the journalist.

TeleMadrid presenter Javi Gómez took to social media to confirm the events, explaining the cameraman was punched ‘four times’ because some thought that there was a ‘yellow ribbon on the camera’. Gómez ended the tweet by reflecting that, ‘paradoxically, it was a demonstration to protest against an attack.’

The protest was reportedly tense with various incidents breaking out. Some 600 people, according to the Barcelona City Council, gathered at the Barcelona’s Ciutadella Park in a demonstration in support of an individual allegedly attacked in an incident involving the removal of yellow ribbons.

Asking participants the question “Are you tired of yellow ribbons too?” the protest was called by the España Ciudadana platform, close to the unionist Ciutadans (Cs) party, whose leaders were also present. Ciutadans, in fact, sustains that participation was at close to 1,000.

An incident that became political

According to La Vanguardia newspaper, both people involved told the Catalan police that it all started when the woman’s children stripped yellow bows from the railings surrounding Barcelona’s Ciutadella Park while playing.

A male passerby told the children off, arguing that they were ‘making the city dirty’ by leaving the torn-up ribbons on the ground, but did not make any political comment. The woman then complained to the man for telling off her children and a fight broke out.

At this point, their accounts diverge, with two different versions over who started the conflict. It is additionally unclear whether the man broke her nose, and whether the woman fought back.

The Catalan public broadcaster, TV3, later spoke to the man and the woman’s husband – who was also there – but both parties denied that the event had anything to do with politics.

A dispute yellow in colour

The incident – and the subsequent demonstration – is the latest in a string of controversies surrounding yellow symbols in Catalonia, hung up to show support for pro-independence Catalan leaders who are either in prison or exiled abroad.

The issue of whether these yellow installations, usually in the form of plastic ribbons, should be displayed in public spaces has, however, become a point of contention for political voices, and a major subject of discussion for Ciudadanos (Cs).

Indeed, on 28 August, the party went on to report the man in the above-mentioned dispute for the alleged attack, in order for the prosecutor ‘to investigate whether there has been a hate crime’, said party leader in Catalonia, Inés Arrimadas.

Catalan politicians across the spectrum condemned the attack of the cameraman during the demonstration against yellow ribbons held on Wednesday.

Catalan president Quim Torra expressed his ‘support and solidarit'” with the journalist from broadcaster Telemadrid, who was attacked after being mistakenly identified as a Catalan TV3 worker.

Ada Colau, mayor of Barcelona, also condemned the incident, saying that the Catalan capital is a city which ‘rejects violence and defends the freedom of the press’.

Shortly after the events, the main association of Catalan journalists said that they had ‘zero tolerance’ to attacks to professionals.

The parties supporting the demonstration against the yellow signs, put up in public spaces in solidarity with the pro-independence jailed leaders, also criticised the attack, including the People’s Party (PP) and Ciutadans (Cs), the party promoting the rally.

Ciudadanos president Albert Rivera said the assailant was not part of the organisation and also claimed that he also threatened some of his party members. ‘No democrat can accept violence,’ said Rivera.

Jailed leaders to start journey back to Catalan prisons