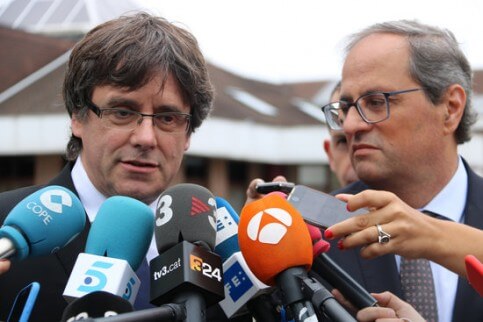 After a meeting in Belgium with Catalan president Quim Torra, the former president Carles Puigdemont warned on Monday that some Catalan political parties are ‘fueling a non-existent civil confrontation’.

Although he did not name the party, the exiled leader’s words referred to the unionist Ciutadans (Cs) denunciation of a ‘social fracture’ in Catalonia, after a man allegedly attacked a woman whose children tore down yellow ribbons, even though both people involved in the fight deny there was a political motive.

Puigdemont believes that political parties such as Ciutadans ‘have created mechanisms for confrontation’ with the help of some media. For him, this media narrative is a ‘toxic bubble’ that he said would not succeed.

Torra also referred to the controversy over the yellow ribbons in solidarity with the jailed leaders, flatly rejecting the Spanish prosecutor’s decision to investigate the Catalan police for identifying people removing the signs with the help of such tools as box cutters.

‘It is a decision that is wrong and incorrect,’ said Torra, who also asked: ‘How is it possible that the Spanish police violence on October 1 [referendum day] is not being investigated?’

‘This is a political conflict, so we need political solutions,’ he added.

The meeting between Torra and Puigdemont addressed how to handle the coming weeks and months, which the Catalan government is hopeful will see a Spanish proposal on the self-determination debate.

‘It might be the term of big opportunities if the Spanish government sees these opportunities,’ said Puigdemont.

Sánchez: defence of judge is a ‘state matter’