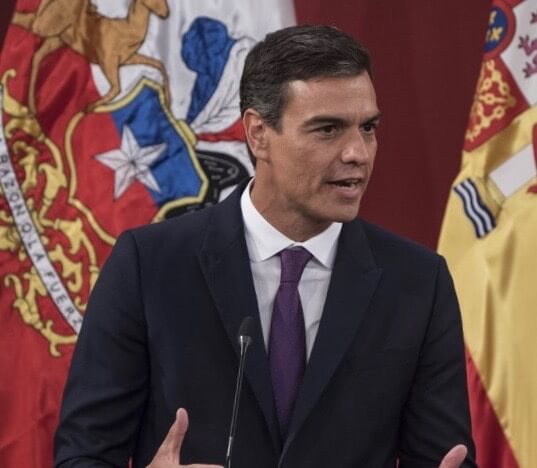 Spain’s Prime Minister Pedro Sánchez has come out in defence of Pablo Llarena, the Supreme Court judge summoned to appear in a Belgian court as part of a lawsuit brought by Catalan independence leaders in exile. ‘It’s not a private matter but one of state,’ said Sánchez.

While on a visit to Chile, Sánchez said that defending judge Pablo Llarena is a defence of the Spanish judiciary: ‘The State must defend the jurisdictional sovereignty of Spain when it is questioned, which the government has been clear about since the beginning,’ he added.

Llarena has been summoned to appear in a Belgian court on September 4. Former Catalan president Carles Puigdemont and four of his ex-ministers are suing Llarena for violating their presumption of innocence in the case against those involved in last year’s independence bid.

The Spanish government announced on Sunday that it had taken the first steps to hire a Belgian firm of lawyers to ‘defend Spain’s interests’ in the case against Llarena. Yet, the Ciudadanos (Cs) and People’s Party (PP) opposition parties criticised Sánchez’s government for ‘abandoning’ the judge.

‘An error of translation’

Meanwhile, the issue of the lawsuit against the judge took a controversial twist when some media outlets reported that comments made by Llarena, upon which much of the suit is based, were wrongly translated and attributed words to the judge that he did not say.

The translation of the evidence into French, so it could be presented to the Belgian court, makes it appear that Llarena had said that the Catalan leaders under investigation were guilty, when in fact he qualified his statements in the conditional tense.

The lawyer defending the exiled leaders, Gonzalo Boye, played down the controversy, arguing it was ‘an error of translation’ and that the court would be duly informed. Boye also pointed out that ‘no one said anything’ when the Spanish authorities sent incomplete translations to Germany during the attempt to extradite Puigdemont.

The PP opposition party used the news of the error to hit out at the Sánchez executive, calling it ‘worrying’ that the Spanish government had not detected the translation mistake. PP and Cs have begun initiatives in both houses of the Spanish parliament in defense of Llarena.

Later on Tuesday, the Catalan government spokeswoman Elsa Artadi said that Madrid’s move would ‘break the law’. She said that, according to Spanish law, judge Llarena should have requested legal protection to the Spanish government within ten days after the lawsuit was filed. Instead, he took around two months.

‘Before there had been no exceptions as this would have meant breaking the law,’ said Artadi.