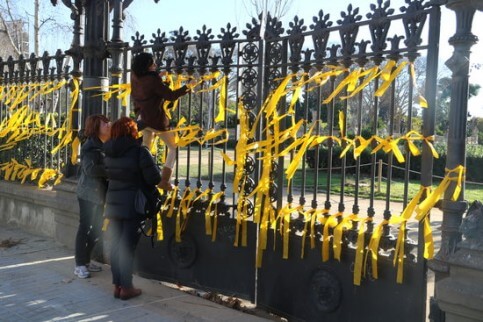 Yellow ribbons and bows showing support for the jailed Catalan pro-independence leaders are once more hitting the headlines and have become the focus of a political storm.The main unionist party in the country, Ciudadanos (Cs), is to report an alleged attack on a woman whose child was removing yellow bows, for the prosecutor ‘to investigate whether there has been a hate crime’, said the party’s leader in Catalonia, Inés Arrimadas.Ciudadanos directly link the attack to the independence movement and has called a protest for this Wednesday.

The People’s Party (PP) also relates the aggression to the independence push and the leader in Barcelona, Alberto Fernández Díaz, has announced that his party will open an office to ‘support’ those sued, fined or attacked for tearing down yellow bows.

‘We were right when we said that this [independence push] would cause a serious social fracture. The social fracture in Catalonia is a reality,’ said Arrimadas, who added: ‘In order to reject this attack, suffered by this woman, and to support her and her family, Ciudadanos calls for a protest next Wednesday at 7pm in the place where the attack occurred.’

Yet the position taken by the hardline unionist party clashes with the version of events on Saturday as explained by both of the people involved in the incident. Both of them have denied that the quarrel was politically motivated.

According to La Vanguardia newspaper, both people involved told the Catalan police that it all started when the woman’s children stripped yellow bows from the railings surrounding Barcelona’s Ciutadella Park while playing.

A male passerby told the children off, arguing that they were ‘making the city dirty’ by leaving the torn up ribbons on the ground, but did not make any political comment.

The woman then complained to the man for telling off her children and a fight broke out. At this point their accounts diverge, with two different versions over who started the conflict, and it is unclear whether the man broke her nose, and whether the woman fought back.

The Catalan public broadcaster, TV3, later spoke to the man and the woman’s husband – who was also there – but both parties denied that the event had anything to do with politics.

Criticism to Ciudadanos ‘level of falseness’

The Catalan vice president, Pere Aragonès, said his government rejects all violent incidents, as did the mayor of Barcelona. On Twitter, Ada Colau called for ‘caution’ from the Ciudadanos party and warned it should avoid ‘biased interpretations’. Meanwhile, the Catalan education minister, Josep Bargalló, criticised Ciudadanos’ ‘level of falseness and slander’.