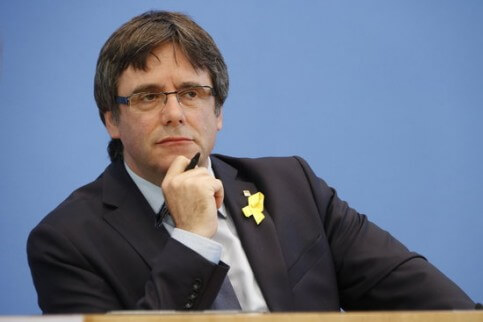 Former Catalan president Carles Puigdemont says that Pedro Sánchez becoming the Spanish Prime Minister is a new ‘opportunity’ for dialogue between the Catalan and Spanish governments, although he also called on Sánchez to put forward ‘specific proposals’ on ‘Catalonia’s right to self-determination’.

Puigdemont made his comments in Scotland, where he went this weekend to speak about Catalonia’s relationship with Europe at the Beyond Borders International Festival held in Edinburgh. It was his first trip outside Belgium, where he resides, since Spain decided to drop an international arrest warrant for him.

The former Catalan leader also admitted that with the arrival of Sánchez’s Socialist (PSOE) government, the climate between the two executives has changed ‘in an obvious way’, and Puigdemont predicted that should the authorities in Madrid initiate talks, president Quim Torra’s government and Catalan society in general will respond positively.

‘Where Now for Catalonia and Europe?’

During the debate, ‘Where Now for Catalonia and Europe?,’ which was mediated by Colombian writer Óscar Guardiola-Rivera, Puigdemont said that the current political situation in Catalonia could actually help resolve ‘the most important conflict of our time: the self-determination of peoples’.

In his talk of about an hour, Puigdemont said that he knows ‘what it is to live without democracy’, in reference to the regime of dictator Francisco Franco, who died when he was 13. He also complained that the state in Spain legally allows tributes to Franco while referendums on self-determination are banned.