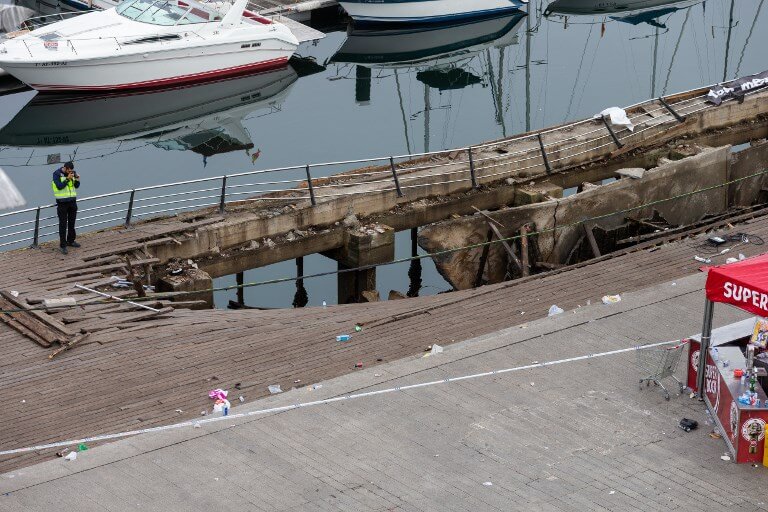 Panic erupted at a packed music festival in Spain when a section of a wooden promenade suddenly collapsed, injuring more than 300 people including nine seriously, officials said Monday.

The seafront platform, which was 30 metres (yards) long by 10 metres wide, was jammed with people watching a rap artist in the northwestern city of Vigo when it suddenly caved in just before midnight on Sunday, local mayor Abel Caballero told reporters at the scene.

Rescuers armed with an infrared camera combed the site for three hours to ensure no one remained trapped underneath while divers searched the nearby sea, he said.

‘Police got the people out of the area very quickly. There were two people who got trapped by debris, firefighters had to remove them and it was not easy to get them out,’ he said in an interview with Spanish public television TVE.

The mayor said it was not clear what caused the collapse of the promenade, which was built in the 1990s. But local daily El Faro de Vigo said it happened shortly after Spanish rap artist Rels B told the crowd to jump at the start of his concert.

‘The floor gave way beneath us as if we were in an elevator. It was a question of five seconds,’ concert-goer Aitana Alonso told the newspaper.

‘The platform broke and we all fell. People landed on top of me. I tried to get out and couldn’t. My foot ended up stuck in the water but I managed to free it before a guy gave me his hand and pulled me out,’ she said. ‘There were people underneath me, shouting that they couldn’t get out.’

A total of 316 people were injured, including nine seriously, the regional government of Galicia where Vigo is located said in a statement. An earlier estimate had placed the number of wounded at 266.

Those seriously wounded, including two minors, had broken bones or head injuries but their lives were not at risk, Galicia’s regional health minister Jesus Vazquez Almuina told Spanish public radio.

In a Twitter message, Prime Minister Pedro Sánchez expressed his ‘solidarity with the injured’ and wished they have a ‘prompt recovery’.

The concert was part of the two-day O Marisquino Festival in Vigo, which draws thousands of tourists to the city of around 300,000 people.