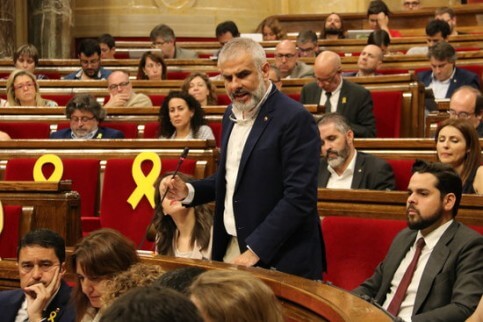 Ciutadans (Cs), the main unionist party in Catalonia, is filing criminal charges against the parliament speaker Roger Torrent and members of the chamber’s bureau who allowed a vote in support of independence last February.

Cs accuses them of breach of official duty for greenlighting a resolution by far-left CUP party, urging the Catalan chamber to abide by the ‘political goals’ laid out in a parliamentary declaration approved after a non-binding referendum on independence in 2015.

Carlos Carrizosa, Cs spokesperson in parliament, urged the Spanish Prime Minister Pedro Sánchez not to overlook political actions in Catalonia, and accused him of being a ‘hostage’ to pro-independence parties.

Sánchez came to power last June after ousting former president Mariano Rajoy in a no-confidence vote. The support of pro-independence parties was instrumental in securing the votes he needed to succeed.

The unionist party is taking to court the highest authority in the Catalan chamber, as well as all parliament bureau members from Esquerra (ERC) and Junts per Catalunya (JxCat) parties, currently ruling Catalonia in a pro-independence government coalition.