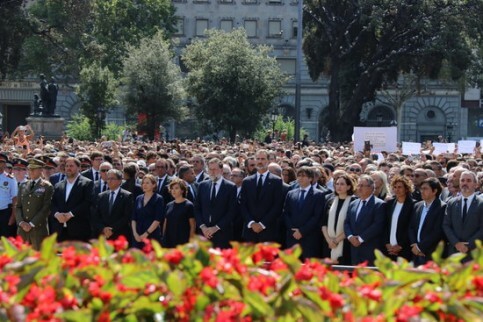 Pro-independence groups in Catalonia have announced that they will not attend the remembrance ceremony to be held in Barcelona on Friday, one year after the terror attacks, to protest against the presence of Spain’s King Felipe VI.

Elisenda Paluzie, the president of the grassroots Catalan National Assembly (ANC), rejected an invitation from Ada Colau, the mayor of the city. She will instead attend a rally held at the Lledoners prison, in Catalonia, where the former interior minister Joaquim Forn is jailed for his role in the independence bid.

An unpopular figure in Catalonia, Felipe VI infuriated independence supporters when he spoke to condemn last October’s referendum and made no mention of the police’s violent crackdown on voters.

Most Catalan government members were subsequently either imprisoned, like Forn, or left the country to avoid prosecution, like former president Carles Puigdemont.

Paluzie stressed that the ANC will also pay homage to the victims of the attacks, which left 16 people dead and more than a hundred injured, both in Barcelona and in the seaside town of Cambrils.

The organisation credits the former minister for being the politician responsible for the Catalan police, the Mossos d’Esquadra, which killed the man responsible for most of the deaths four days after the attacks, thus dismantling the jihadist cell.

Far-left CUP, the key partner in parliament for the pro-independence government, will not attend the remembrance ceremony in Barcelona either, and urged its allies to do the same.

‘We have nothing to do with someone who promotes selling weapons to the countries who feed violence like the one we experienced on August 17 in Barcelona,’ said Natàlia Sánchez, an MP for CUP. ‘We must understand the geopolitical situation.’

While CUP MPs will not attend the remembrance ceremony, the party did not rule out that some of its members at the local level might attend the event.

Last year, some 170 organisations presented a manifesto against the king’s presence due to his relationship with Saudi Arabia. While the ANC will not call demonstrations against the king, CUP does not rule out that some of the party’s supporters might take to the streets to protest. ‘It’s quite likely that it will happen again,’ said Sánchez.

Barcelona’s city council called on all attendees to be ‘responsible’ and asked them to respect ‘the mourning and the victims.’ ‘There are many days to do politics, but not on the day of the [terror attacks’] remembrance ceremony,’ said Laia Ortiz, the acting mayor.

Focus on Ripoll: a year after Barcelona terrorist attacks