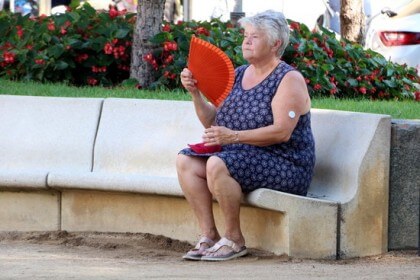 For anybody who was in Catalonia over the weekend, they might have noticed how hot it is. Although the worst has passed, a heatwave warning remains in place. The heat is expected to stay until Wednesday this week.

The extreme temperatures peaked on Saturday with highs of over 40°C in many parts of the country.
Barcelona recorded a maximum temperature of 39.8°C. Meanwhile, elsewhere in Catalonia, the mercury soared even more over the weekend. In the Ebre interior and Camp de Tarragona to the south of the country, the temperature reached over 41°C. There were few areas where one could escape from the heat. Many areas surrounding the capital reached highs of 39°C and more.

The worst is over for now, but the heatwave warning remains in place, as do recommendations on how to survive the high summer temperatures. On Monday, storms are forecast for some parts of the country, bringing much needed relief to the ongoing heat. The minimum temperature in Barcelona is set to be 28°C. In some parts of Catalonia, the mercury will rise well into the 30’s again, such as Girona (36°C) and Lleida (38°C).

On Saturday, more than 100 calls were made to the CatSalut Respon health service related to the heatwave. A homeless man died in Barcelona on Friday due to heat stroke. Since the heat warning was issued on Thursday, emergency services in Catalonia attended 27 incidents, including phone calls and victims of heat strokes. On Saturday, two more men also died because of heat stroke in Tarragona, where the temperature nearly reached 40°C.

For beer lovers this summer: Moritz Sour and Radler

Nadal can avoid Djokovic until final