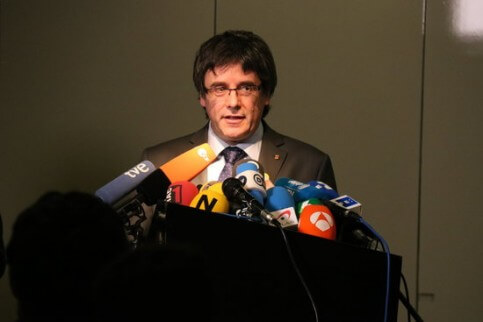 Former Catalan president Carles Puigdemont’s extradition has been accepted by the German court handling his case, but only for misuse of public funds and not rebellion. The Schleswig-Holstein court announced its decision on Thursday morning, rejecting the charge of rebellion as grounds for extradition because there is no equivalent offense in German law.

The court has not ordered Puigdemont be taken into custody, so for the moment the former president remains free in Germany.

The court also said that it is now up to the Spanish judiciary to “clarify” the details of the misuse of public funds offense against Puigdemont. But they execute it without “examining” it in depth as it is one of the crimes listed in the European arrest warrant legislation.

Option of challenging decision in German Constitutional Court not ruled out

Both the court and the prosecutor in Germany told the Catalan News Agency (ACN) that the ruling cannot be appealed by any of the parties involved in the case, although they did not rule out Puigdemont’s defense having the option of challenging the decision in Germany’s Constitutional Court.

According to the judges “there is enough evidence to show that Puigdemont was ultimately responsible” for the Catalan government’s finances. They also believe that the head of the Junts per Catalunya candidacy “was easily able to see that holding a referendum would cost money.”

According to the Schleswig-Holstein court, “there is no evidence that all of the costs” for the October 1 independence referendum “were paid for by third parties.” “The specific questions have to be clarified in Spanish criminal procedure,” they add.

Yet the judges said that the crime of high treason, the equivalent to the Spanish one of rebellion, “is based on a level of violence not reached” during the October 1 referendum.

“With the vote, a level of violence leading to an immediate separation of Spain was not reached, and according to Mr. Puigdemont, this was only a prelude to further negotiations.” According to the magistrates, the “violent clashes” between voters and the Spanish Police did not reach the extent of “threatening Spain’s constitutional order.”

The decision also rules out the possible crime of alteration of the public order, because Puigdemont “only intended to hold a vote, he was not a spiritual leader of the violent events.”

Therefore the alternative equivalent crime to the Spanish rebellion given by the German public prosecutor was also denied.

The decision made public on Thursday morning also rejects a prison order while executing the extradition, because Puigdemont “has complied with his obligations” in Germany.

Thus he will continue so far with the same precautionary measures, which include reporting to authorities regularly and not leaving Germany.

“We will fight until the end, and we will win!” says Puigdemont

Puigdemont responded to the decision on Twitter: “We’ve struck down the main lie upheld by the State. The German judiciary denies that the October 1 referendum was rebellion. Every minute that our colleagues spend in prison is a minute of shame and injustice. We’ll fight until the end, and we will win!” he said.

Pedro Sánchez says no to referendum