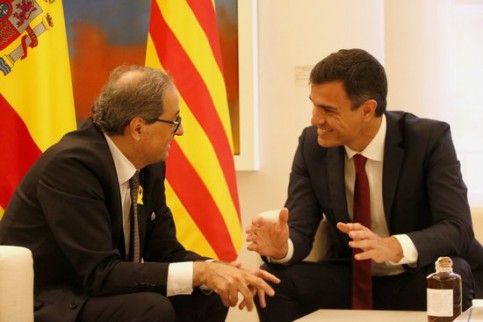 The meeting between the Catalan and Spanish leaders was ‘effective’ and ‘full of courtesy and cordiality’, according to the Spanish deputy prime minister, Carmen Calvo.

Yet she also confirmed that Catalan President Quim Torra‘s main aim failed: agreeing on an independence referendum for Catalonia or at least making some progress towards this aim.

Calvo talked to the press on Monday afternoon, shortly after the meeting between Torra and Sánchez, the Spanish leader.

She said that Sánchez was clear on closing the door on a possible independence vote. ‘The right to self-determination does not exist in any democracy, there is little to talk about this,’ stated Calvo. ‘But regarding Catalonia’s autonomy there is more to say.’

Indeed, she said both leaders agreed to re-launch bilateral committees between both governments, which have been inactive for the past seven years.

One of Torra’s main demands in the meeting was lifting the suspension of over a dozen Catalan social laws passed in the past few years. The former Spanish government took them to them to the Constitutional Court, which subsequently suspended them. ‘We’re ready to lift the vetos on those laws,’ said Calvo.

She also explained that Pedro Sánchez is ready to hold a follow-up meeting in Barcelona, at some point in the future, as requested by Torra. While the Catalan leader asked for it to occur this September, Calvo avoided setting a date.

According to Sánchez’s number 2, Torra also tackled the situation of the jailed leaders. But his interlocutor said they cannot take any action. ‘The Spanish president does not interfere in judicial procedures.’