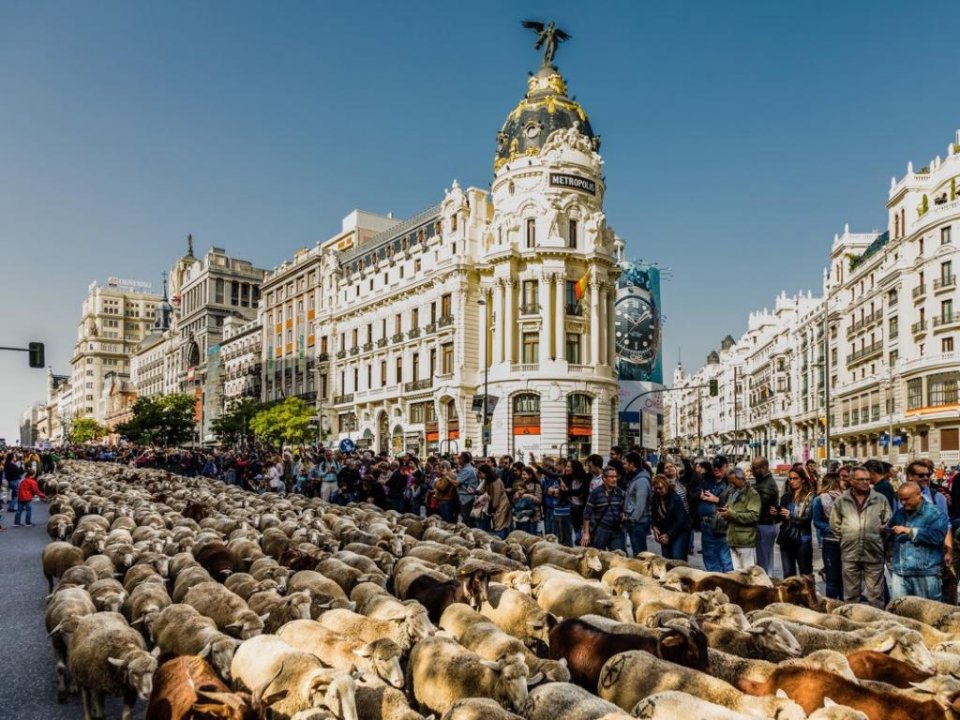 Around 1,200 sheep and 200 goats took over the centre of Madrid with their bleating and bells on Sunday morning, as part of a festival that recreates the pastoral practice of moving livestock to new grazing grounds.

Shepherds herded the animals through the paved streets of the Spanish capital while re-enacting what their ancestors did for centuries: move flocks from cool highlands in the summer to lowland winter pastures.

Madrid, Spain’s lively capital city, has always been part of the 125,000 km grid of farming paths that cover the Iberian Peninsula.

As part of the Fiesta de la Transhumancia, the Transhumance Festival, organisers make a symbolic payment for the right to use the drovers’ route that crosses the capital. The payment presented at Madrid’s city hall in medieval Spain’s currency consists of ’50 maravedis’, as stated in an agreement between the city and shepherds that dates back to 1418.

The closeness of the animals delighted the city’s residents and tourists who gathered to watch the unfamiliar ritual.

Madrid has held the festival since 1994, and towns and smaller cities in Italy, France and California hold similar events.

In Spain, modern farming methods have reduced practising transhumance – the seasonal movement of livestock – to a small group of farmers that keep the tradition alive through associations such as Concejo de la Mesta, who are responsible for the Transhumance Festival in Madrid.

They promote transhumance for advantages such as sustainability, cultural value and environmental protection since areas walked by sheep are less prone to wildfires.

According to the Transhumance and Nature Association, 52 families carry out the practice in Spain.

Why yes they are! Tomorrow is the Fiesta de la #Transhumancia (Transhumance Festival) in Madrid, where, since 1994, sheep, oxen, and their shepherds walk through the city to highlight the historic and continued importance of livestock in Spain. pic.twitter.com/Klo49VIpjU