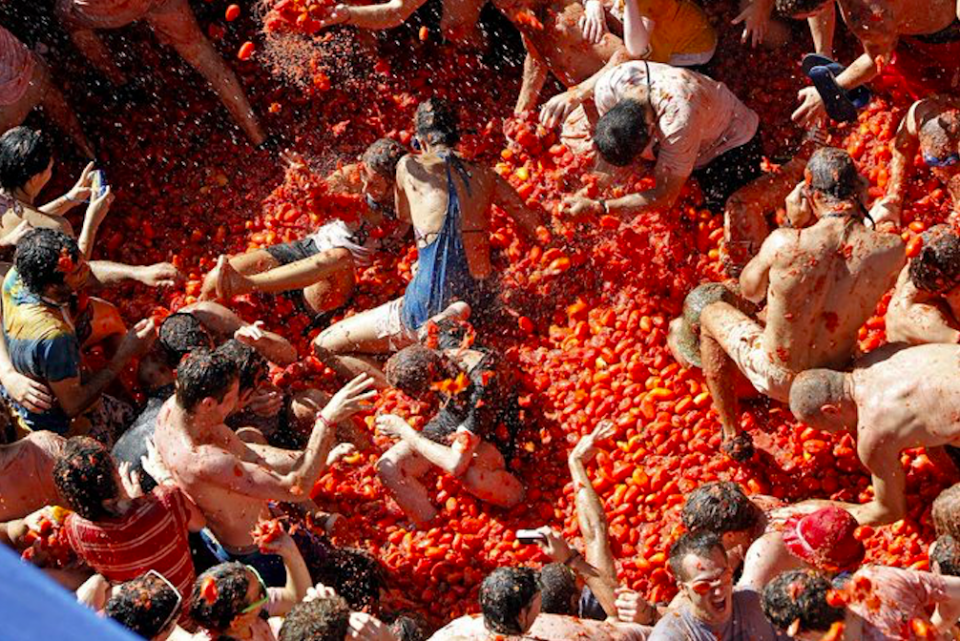 Thousands of people splattered each other with tomatoes on Wednesday in the town of Buñol, in the Valencia region, celebrating the return of the annual ‘Tomatina’ food fight after a two-year absence due to the Covid-19 pandemic.

Six trucks carrying 130 tonnes of ripe tomatoes rolled through the town’s narrow streets, as teams on board distributed the load among the crowds for an hour-long frenzy.

The festival, referred to as ‘the world’s biggest food fight’, has become a major draw for foreign visitors, in particular from Australia, Britain, Japan and the United States.

But this year, the 75th edition, only 15,000 of the 20,000 available tickets sold as fewer people from Asia made the trip due to lingering Covid-19 travel restrictions, local officials said.

The bang of fireworks set off the free-for-all at noon and within minutes the streets were bathed in red goo.

Revellers, some wearing goggles to protect their eyes, bent down to pick up tomatoes from the ground to throw while others lay in the pulp.

The town of around 9,500 people has since 2013 charged a participation fee to control the growing numbers who had flocked to the festival last held in 2019 before Covid curbs.

‘We were really eager to resume our beloved party, to once again be able to throw tomatoes at each other and release all the adrenaline we built up these last two years,’ said Maria Valles, Buñol’s town councillor for tourism.

The food fight is followed by festivities including concerts and contests which last into the night.

The ‘Tomatina’ started in 1945 when locals brawling in the street at a folk festival grabbed tomatoes from a grocer’s stall and let loose.

In 2002 Spain’s tourism secretary named the event a ‘festivity of international tourist interest’ because of its popularity.

The ‘Tomatina’ has inspired similar celebrations in Colombia, Costa Rica, Chile and the United States.

Around 130 tonnes of tomatoes were loaded in the eastern Spanish town of La Llosa and transported to Bunol where the Tomatina festival will be held after a two-year break pic.twitter.com/Td2qjqTRXC

More than 20,000 revelers hurled tomatoes at each other at ‘La Tomatina,’ Spain´s most famous food fight festival pic.twitter.com/FbF1SR6UfK