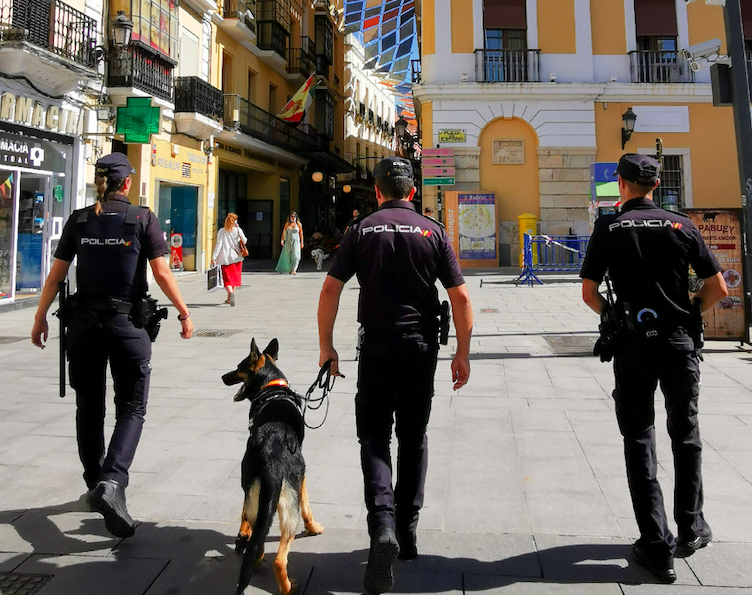 The Spanish National Police have begun wearing body cameras to record their interactions with the public in a move aimed at ensuring greater security that has also gained ground in Europe and the US.

Spain’s Interior Ministry said the bodycam was launched on Monday and would be ‘rolled out on a gradual basis to all police officers’, without saying how many were involved in the initial stages.

Spain’s TVE public broadcaster said the tiny cameras were being attached to the officers’ uniforms and could be activated either manually or automatically.

The main Spanish police union JUPOL hailed the move on Twitter, saying it was in response to ‘a request that the union has been making’.

‘It will guarantee security, both for us to avoid any kind of misrepresentation of our interventions, as well as for the public, who will be able to clearly see the police’s professionalism and that there is no abuse of power nor excesses,’ JUPOL union spokesman Pablo Pérez told TVE (see video link in Tweet below).

Forces in Europe and the United States are increasingly turning to such technology to boost transparency following a string of fatal shootings and other claims against police over the past decade.

‘The cameras are being used under public safety protocols in order to record everything that happens in the event of an unwarranted offence during an operation,’ Spanish Interior Minister Fernando Grande-Marlaska told TVE ahead of the rollout.

‘If they are activated, it is to guarantee security and really be transparent so that the officers’ actions can be seen and checked,’ the minister said.

‘This means security for both the police and the public,’ he added, suggesting they would also be available to Spain’s Guardia Civil police force.

France began trialling bodycams in 2013 before a gradual rollout in 2015 in a move welcomed by police, but greeted with scepticism by rights groups who said there was no guarantee they would be always activated.

Police in London and New York also began pilot schemes in 2014 with credit-card sized cameras clipped onto their uniforms with the technology gradually deployed over the following years.

But the cameras have had mixed success. The absence of any legal obligation governing their use can also limit their scope to uncover police misconduct.