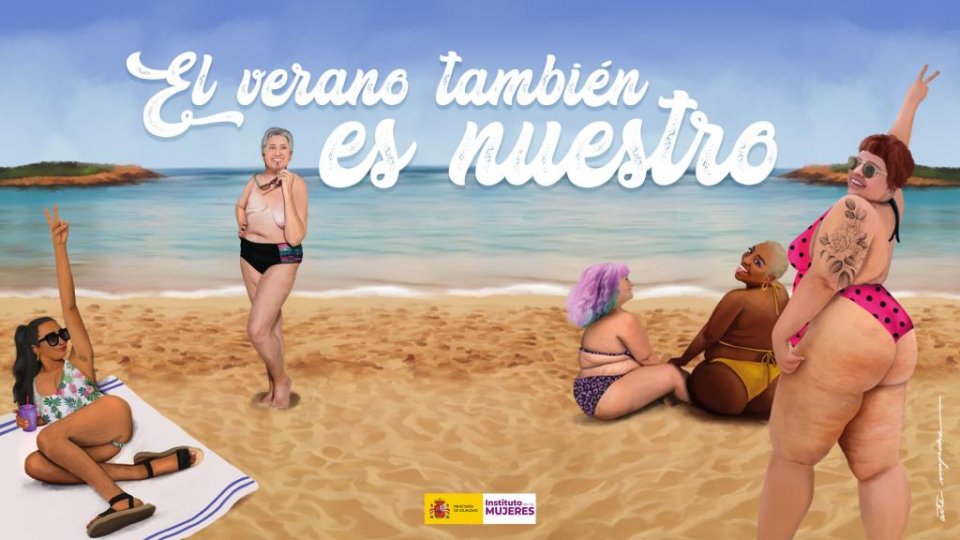 A British model has said that her image was used in the Spanish Ministry of Equality’s campaign promoting body positivity without her permission. [See earlier full report below about the campaign].

Nyome Nicholas-Williams, aged 30 and from London, has told the BBC that a photo from her Instagram feed was used without her knowledge.

The artist behind the image has reportedly apologised to Nyome, but she’s not yet heard from the Spanish government.

Nyome wears a gold bikini in the poster image, and can be seen sitting on the sand, with her head turned towards the viewer.

Describing herself as a ‘model with influence’ on Instagram, she has said that one of her 79,000 followers alerted her after the campaign was widely reported by the world’s media.

She said, ‘It isn’t a stock photo, it’s a picture that I’ve taken on my Instagram. It’s rude and it’s disrespectful.’

On Instagram she has said, ‘It’s so important for women to consent to their images and body being used. Also to be paid if said images are being used.’

After posting a complaint about it on her account, Nyome was reportedly contacted by the illustrator who created the final poster.

‘They said they used my image because they were running low on time,’ she told the BBC, adding that they apologised and ‘said they’d compensate me’.

She said: ‘I feel it’s very reactive rather than proactive. I’m annoyed because if they’d asked me in the beginning, I could have made a decision, I probably would have said yes.’

Nyome also said that she found it ‘very ironic and wild’ that the Women’s Institute in Spain (linked to the Ministry of Equality) failed to get consent from her to use her image.

‘They should know better,’ she said.

So far it is unknown if the other women in the poster were asked to give their consent. Nyome told the BBC that she hoped that the woman shown with a mastectomy was asked and ‘would be happy to have that image out there like that’.

Spain’s Ministry of Equality has launched a new summer campaign to encourage women of all shapes and sizes to hit the beach, with the slogan: ‘Summer is ours, too.’

The campaign’s promotional image features five diverse women of different body types, ages and ethnicities enjoying a day in the sun. The campaign also features a woman who has had a mastectomy topless.

‘Summer is ours, too,’ it says. ‘Enjoy it how, where and with whoever you want.’

The campaign encourages women to reject ‘stereotypes’ and ‘aesthetical violence’ – a reference to social pressure some women feel to conform to beauty ideals.

Irene Montero, Spain’s Equality Minister, tweeted: ‘All bodies are valid and we have the right to enjoy life as we are, without guilt or shame. Summer is for everyone!’

‘All bodies are beach bodies,’ Ione Belarra, the leader of Podemos who serves as social rights minister in Spain’s PSOE socialist-led coalition government, said. ‘All bodies are valid and we have the right to enjoy life as we are, without guilt or shame. Summer is for everyone!’

Antonia Morillas, head of the Spanish Women’s Institute attched to the Ministry of Equality and the organisation behind the initiative, said physical expectations affected women’s self-esteem and denied them their rights.

‘Diverse bodies, free of gender stereotypes, occupying all spaces. Summer also belongs to us. Free, equal and diverse,’ she tweeted on Wednesday alongside an image from the campaign.

Morillas said: ‘When women are told that if you are not thin, young, or if you have stretch marks, cellulite or scars, that your body is invalid, our self-esteem is destroyed and it has a direct impact on our health, on our quality of life and on the possibility of being and exercising all our rights. To speak of bodily discrimination is to speak of the violation of rights that women suffer when we do not have normative bodies.’

‘Fat women suffer harassment in the street, on the beaches, they are censored and stigmatised, [and] they find enormous difficulties in accessing employment or other rights,’ said Morillas. ‘Hence, from the Women’s Institute we claim that summer also belongs to us, to all women, from our diversity.’

Spain’s socialist-led coalition government, which came to power four years ago, has made women’s rights one of its political banners. The cabinet has 14 women and eight men in ministerial positions.

Reactions to the summer campaign have been diverse, with some political opponents stating that it is absurd and trying to ‘create a problem that doesn’t exist’. Others have shown support for the campaign and are glad the ministry is ‘doing its part’ to support women.