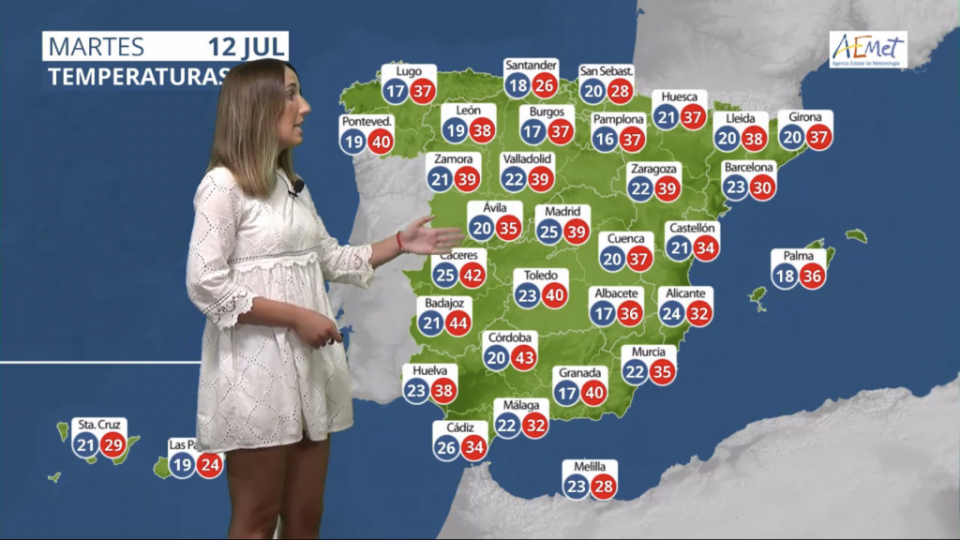 For the second time this year Spain is starting to feel a heatwave, with the country’s meteorological agency AEMET saying that temperatures could rise as high as 44C in some areas during this week.

All of the country’s regions, with the exception of Asturias, Murcia and Cantabria, continued to be on alert for extreme temperatures on Monday.

Andalusia, Aragón, Castilla y León, Castilla La Mancha, Madrid, Canarias, Extremadura and La Rioja were on orange alert for high temperatures, which could exceed 41C, according to AEMET. It was forecast to reach 44C in Badajoz, Extremadura, on Tuesday.

This heatwave, the second this year, is expected to be extensive, affecting most of the country, and unusually long. It could peak on Tuesday or Wednesday but last a total of nine days, until next Sunday, according to AEMET. This would make it one of the three longest heatwaves Spain has seen since 1975, according to agency spokesman Ruben del Campo.

The highest recorded temperature on Sunday was 43C by the Guadalquivir river near Seville in Andalusia and in Badajoz, Extremadura, forecasters said.

Ruben del Campo said temperatures could touch 44C in Corboda or Extremadura on Tuesday. ‘They could also reach 42C in parts of (central Spain) like Castilla y León and Galicia on Tuesday and Wednesday,’ he said.

He also said there was also a high risk of forest fires during the heatwave.

In La Rioja, northern Spain, 90 firefighters were battling to bring a blaze under control which started on Saturday night, regional authorities said on Sunday.

In El Ronquillo, near Seville, about 100 people had to be evacuated after a fire closed in on their homes, the Andalusian regional authorities said.

In June, Spaniards weathered the earliest heatwave since 1981, according to AEMET, with temperatures surpassing 40F in parts of central and southern Spain.