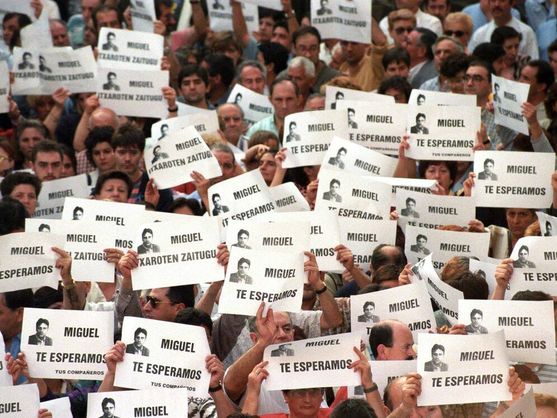 Spain’s National High Court judge, Manuel García Castellón, has agreed to summon three former ETA chiefs, who were members of the executive committee of the terrorist group, for their alleged responsibility in the kidnapping and murder of a local politician in 1997.

All three, who were part of the leadership of the now-defunct armed separatist group, have been formally named on charges of ‘terrorist kidnapping and murder’, the court documents show.

At the time, they gave the government 48 hours to meet their demands but when the deadline expired, they shot the 29-year-old twice in the head and dumped him. He died a day later.

His murder shocked Spain to the core, sparking mass nationwide protests that ended up being a turning point in the fight against ETA.

The decision to now summon the three follows a report from Spain’s Guardia Civil commissioned by the court in order to determine the members of the ETA executive committee (ZUBA) and their possible participation in the kidnapping and murder of the councillor.

All three suspects are now in their early 60s and have spent long years behind bars for the bloodshed committed while part of ETA.

In the case of ‘Anboto’ and ‘Mikel Antza’, judge García Castellón has not stipulated any additional measures, but the ‘Kantauri’ summons is more complicated. Despite being in a Spanish prison, he was handed over by French authorities for acts other than Blanco’s murder. The Paris Court of Appeal, in fact, refused to extend the delivery for this crime last May, so the judge has now agreed to issue a ‘new European arrest and delivery order’.

Following the breakup of ETA’s leadership in southwestern France in 1992, the group drew up a ‘destabilisation strategy’ which included identifying as targets politicians from Spain’s two main political parties, the PP and the ruling socialists (PSOE).

All three suspects were part of the executive committee, which ‘planned and carried out’ that strategy and in 1997 decided to kidnap a member of the PP, which had just recovered office from the socialists.

‘In 1997, the kidnapping of a PP councillor was an absolute priority for ETA’s “directorate”, an action that had to be carried out that summer,’ the judge wrote.

As leaders, the three suspects held ‘enough control and decision-making power over the group’s terrorist activity that they could have either decided not to kidnap the victim or prevented the kidnapping’s ultimate outcome … by giving the order to release him’, it said.

‘The terrorist action by the Donosti commando cell could not have taken place on its own, it was carried out following the orders, and with the express authorisation of … the executive committee.’

ETA is estimated to have killed 853 people during its decades-long campaign for Basque independence, which began in 1959 under the Franco dictatorship. The group announced a permanent ceasefire in 2011 and formally disbanded in 2018.

Sánchez to meet Aragonès on 15 July in Madrid, first official meeting since ‘CatalanGate’