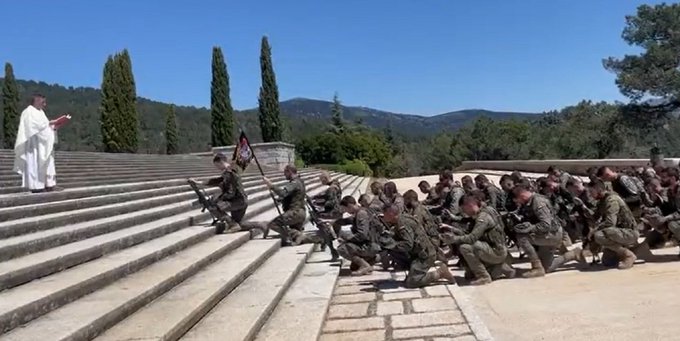 The Spanish armed forces have sacked an army captain after a video emerged showing around 30 soldiers of the officer’s unit kneeling in front of the controversial Valley of the Fallen mausoleum, the most potent monument still in existence of the Franco dictatorship.

Spain’s Ministry of Defence said on Thursday that the captain was dismissed within hours of the video being posted on social media and that an investigation into the incident would be completed within 48 hours.

In the video [see Tweet below], the soldiers can be seen kneeling with rifles in their hands on the steps at the mausoleum’s esplanade and presenting their company pennant for a blessing by a priest. The ministry has said this it was an ‘unauthorised’ activity that was carried out during a scheduled march, and an investigation has been opened to clarify the facts and responsibilities.

Those involved are reportedly a military unit of the ‘Uad-Ras II’ Light Armoured Battalion, members of the ‘Asturias’ 31 (RI 31) Infantry Regiment, and a unit in the ‘Guadarrama XII’ Infantry Brigade, located at the military base of El Goloso, in Colmenar Viejo (Madrid).

Many people viewed the video as tarnishing Spain’s claim to be a secular state, and several political parties have demanded an explanation from Defence Minister Margarita Robles.

The grandiose mausoleum with its towering cross was Franco’s burial place and has always been a revered shrine for extreme right-wing followers. In 2019, the Socialist government of Prime Minister Pedro Sanchez ordered the removal of Franco’s remains under a law that banned exaltation of the dictator at the site.

Thousands of political prisoners who worked on the construction of the mausoleum near Madrid remain buried there without identification.

Franco ruled Spain between 1939 and 1975, after he and other officers led a military insurrection against the Spanish democratic government in 1936, a move that started a three-year civil war. The military and the Roman Catholic Church formed the backbone of Franco’s regime until the dictator died in 1975.

In recent years there have been isolated incidents involving retired army officers criticising the government and expressing nostalgia for the Franco regime.

Unemployment in Spain below three million for first time since 2008