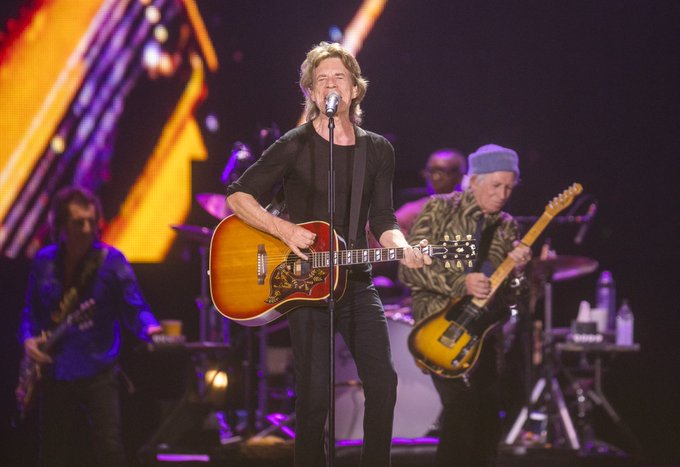 The Rolling Stones rocked Madrid on Wednesday night to kick off their tour of European cities and mark their 60th anniversary as a band.

The concert was dedicated to their late drummer and friend, Charlie Watts, who died last year aged 80. The band have been joined by drummer Steve Jordan for the tour.

Some 53,000 fans at the Wanda Metropolitano stadium roared as they welcomed to the stage the original band members Mick Jagger, 78, and guitarists Keith Richards, 78, and Ronnie Wood, who turned 75 on Wednesday.

‘Hola Madrid!’ shouted Jagger to even louder cheering after the band opened the show with ‘Street fighting man’ and Jagger launched into his signature strut dance moves.

Before the first song, videos of Watts where displayed on big screens behind and surrounding the stage, with the band giving an emotional tribute to their late friend.

‘This is our first European tour without Charlie, we miss him a lot,’ said Jagger in Spanish right before playing ‘Sad, sad, sad’ to a moved crowd.

The band played ‘Gimme shelter’ as the Ukrainian flag and footage of destroyed Ukrainian cities where displayed on the monitors as a statement against war.

During the 14-show tour the British band will play stadiums and arenas in 10 countries, including their homeland.

The Stones will next play in Munich on Sunday and later perform in Liverpool, Amsterdam, Bern, Milan, London, Brussels, Vienna, Paris and Stockholm.

This is the set list of the 19 songs played by the band in Madrid:

Muchas gracias Madrid for an amazing opening show! Hope you enjoyed Out Of Time – that’s the first time the Stones have ever played it live 🎸🙌