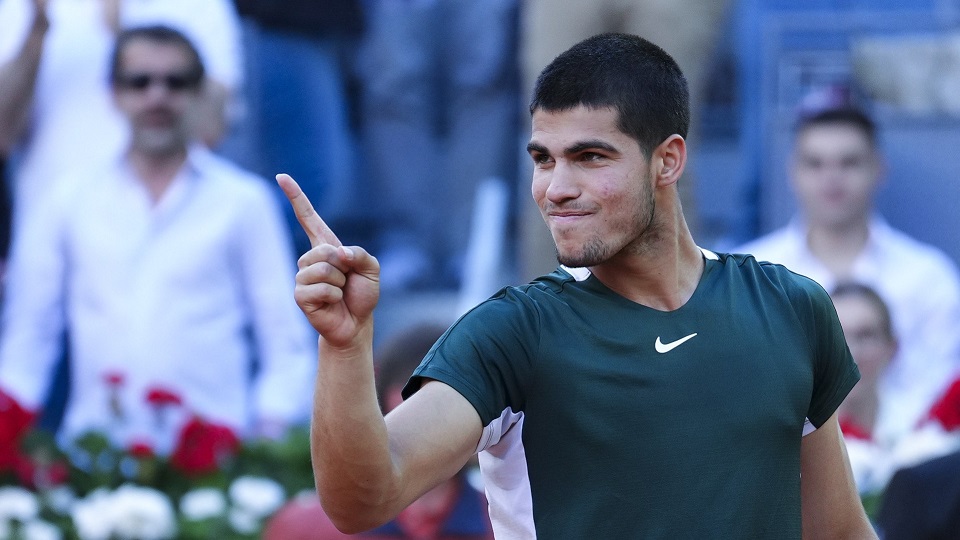 There are very few players who have rivalled Roger Federer, Rafael Nadal and Novak Djokovic over the past two decades, but Spanish teenager Carlos Alcaraz threatens to up-end the established order of tennis after his stunning rise to stardom.

Alcaraz, from Murcia, and who just turned 19 last Thursday, became the first player to beat Nadal and Djokovic on clay at the same tournament on his way to a second Masters 1000 title in Madrid.

Set for greatness, Alcaraz was described by beaten finalist Alexander Zverev as ‘right now the best player in the world’ after the young Spaniard’s 6-3, 6-1 victory on Sunday.

Alcaraz became the youngest US Open quarter-finalist of the Open era last September, then won his first Masters crown in Miami in early April. Only Nadal has won two such titles at a younger age.

‘I would say this is the best week of my life,’ Alcaraz said on Sunday, before pulling out of Rome to rest a sore ankle ahead of the French Open which begins on 22 May.

Coached by former world number one and 2003 Roland Garros champion Juan Carlos Ferrero, Alcaraz knows he has some way to go.

‘I still have to improve in everything,’ he said. ‘I have very good shots, but they can be improved and can be much better.’

Alcaraz was born in 2003, barely two months before Federer won his first major title at Wimbledon.

But, perhaps unsurprisingly, it is his compatriot Nadal — the record 21-time Grand Slam champion — he most admires.

‘I have always looked up to Rafa, I always watched his big moments and matches and learned a lot from that,’ said Alcaraz.

A year ago Alcaraz sat 120th in the world when he made his Madrid debut. Fast-forward 12 months and the hottest young prospect in men’s tennis has soared to a career-best sixth. His four singles titles are the most on the ATP tour this year, as are his 28 match wins.

Stefanos Tsitsipas, last year’s French Open runner-up, is acutely aware that Alcaraz is another significant obstacle in his own quest for Grand Slam glory.

‘He inspires me a lot. I really want to be like him. I look up to him,’ said the 23-year-old Tsitsipas, at the forefront of the generation poised to take over from the ‘Big Three’.

‘I know he’s at a young, early stage of his career. I can see him becoming big in a very short time. I’d really like to get to the level he is right now. I think he’s one of the best players in the world.’

As for Nadal himself, he has insisted that he is pleased for his fellow countryman.

‘Everybody knows the amount of confidence he has right now, the level that he can reach. I’m happy for him,’ said Nadal, who won his first major at Roland Garros in 2005, two days after his 19th birthday. ‘Happy because we have an amazing player in our country for a lot of years to come.’

While Nadal’s time in the spotlight is far from over, as evidenced by his remarkable comeback victory in the Australian Open final, he accepts Alcaraz will divert at least some of the attention.

‘He is young, he is new, and all the new things are much more interesting than older things, without a doubt,’ said Nadal.

Macron proposes ‘EU political community’ that could include Ukraine