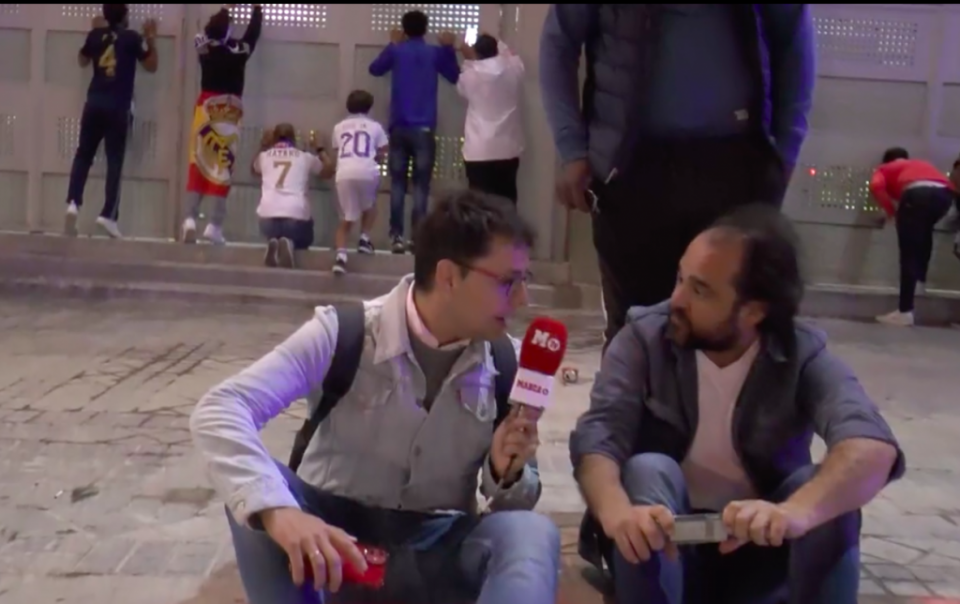 Dozens of Real Madrid fans left the stadium and missed their team pull off another astonishing comeback in the Champions League to stun Manchester City 3-1 on Wednesday night, booking a showdown with Liverpool in the final to be held on Saturday 28 May in Paris.

City had looked certain to go through when Riyad Mahrez put them 1-0 up and 5-3 ahead on aggregate but Rodrygo, on as a substitute, scored an incredible late double, his goals in the 90th and 91st minutes – both goals within 84 seconds – suddenly sending the tie to extra-time.

Karim Benzema scored an extra-time penalty as Real Madrid secured their epic comeback with a 6-5 win on aggregate to reach the final, another remarkable fightback to add to the club’s long list of magical European championship nights.

Some fans had already left the Santiago Bernabeu stadium before the 90th minute, however, with one ticketless supporter telling Spain in English that he saw ‘fans outside in tears’ after hearing the roars inside the stadium just before the final whistle of normal time, and being told they would not be allowed back in for extra-time.

Footage posted from outside the Bernabeu appeared to show some of the supporters who’d left early rushing back towards the turnstiles, after hearing euphoric fans cheering inside the stadium. The club’s famous goal music can also be heard in the background.

You can see some of the scenes in the Tweets below, including one man who’d left early talking to a reporter for Marca:

Bad night to have made an early escape from the Bernabéu pic.twitter.com/yXn3qPFM2i

‘It’s the greatness of this club,’ said Real coach Carlo Ancelotti after the match. ‘It’s a club that doesn’t allow you to give up even if it seems everything is over. It gives you the strength to keep going, to fight, to believe.’

Ancelotti said his players had watched a video before the game, showing eight of Real Madrid’s comebacks this season, for inspiration.

‘At the end it said ‘There’s one more left’ and we have achieved it,’ Ancelotti said, after becoming the first coach to reach five Champions League finals.

Madrid had already performed the unlikeliest of rescue acts to defeat both Paris Saint-Germain in the last 16 and then Chelsea in the quarter-finals.

Like PSG and Chelsea before them, Manchester City will wonder how they emerged as losers from a match they largely controlled and there will be fresh scrutiny on coach Pep Guardiola, who, for all his success, goes another year without leading City to the European glory they so crave.

City’s collapse would have been almost inexplicable had it been against anyone other than Real Madrid, who advance to their 17th final in the competition. They are a victory against Liverpool away from lifting a 14th European Cup.