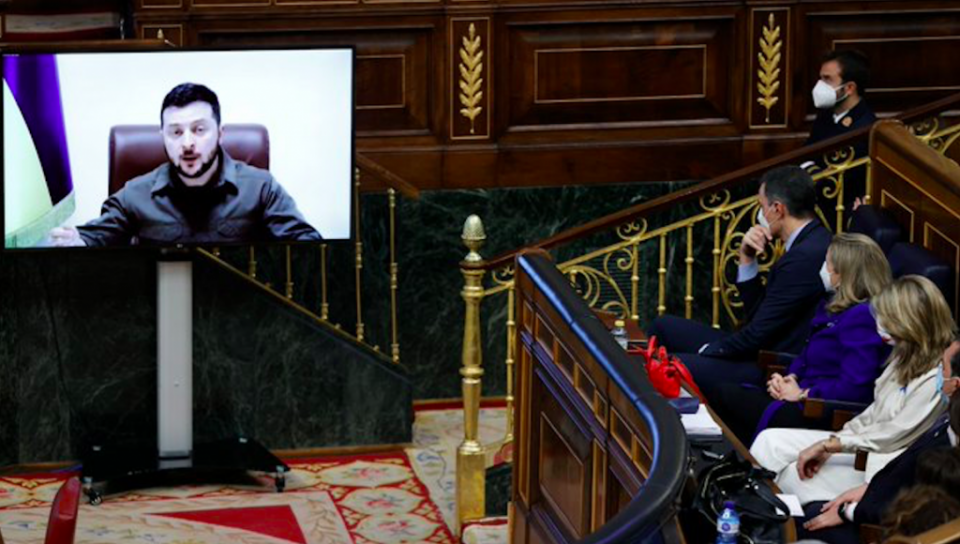 Ukrainian President Volodymyr Zelensky compared Russia’s assault on his country to the Nazis’ 1937 bombing of the town of Guernica in an address to the Spanish Congress on Tuesday.

‘It’s April 2022 but it seems like April 1937 when the whole world heard about one of your cities, Guernica,’ he told Spanish MPs, in reference to the atrocity when aircraft from Hitler’s ‘Condor Legion’ carpet-bombed Guernica during Spain’s 1936-1939 civil war in support of General Francisco Franco’s nationalist forces.

Hundreds of people were killed, many of whom were at a weekly market in the town centre, in an atrocity that shocked the world and was immortalised in Picasso’s haunting anti-war painting.

Historians give an estimated death toll of between 150 and 300 people, while local authorities give a much higher figure of 1,654.

‘We never thought that we would once again see shocking images of bombings and massacres of innocent people on European soil,’ Spanish Prime Minister Pedro Sánchez said after Zelensky’s speech.

Earlier on Tuesday, Spain’s foreign minister announced that the country would be expelling 25 Russian diplomats in response to alleged war crimes by the Russian military in Ukraine.

Zelensky said ‘the most terrible war crimes in the world’ since World War II were being committed by Russian forces, whilst speaking to the council.

He described the scenes of rape, torture and killing of civilians in Ukraine, stating that ‘hundreds of thousands’ of Ukrainians had also been deported to Russia.

He said the civilian deaths recently documented in Bucha were ‘only one example’ of what Russian forces have been doing throughout Ukraine since the war began and said more evidence of war crimes will emerge.

Zelensky called for the UN to ‘act immediately’ and expel Russia from the UN Security Council. He also called for reform of the international body. ‘We must do everything in our power to pass on to the next generation an effective UN with the power to take preventative action to ensure peace,’ he said.

The UN Security Council also viewed a graphic video of dead women, children and men, including burned bodies and victims in mass graves, in shocking images of atrocities committed during Russia’s invasion.

The 90-second clip – which showed partially uncovered dead in shallow graves, several bodies in a courtyard and dead people with hands tied behind their back slumped towards a wall – played minutes after the Ukrainian president addressed the 15-member council.