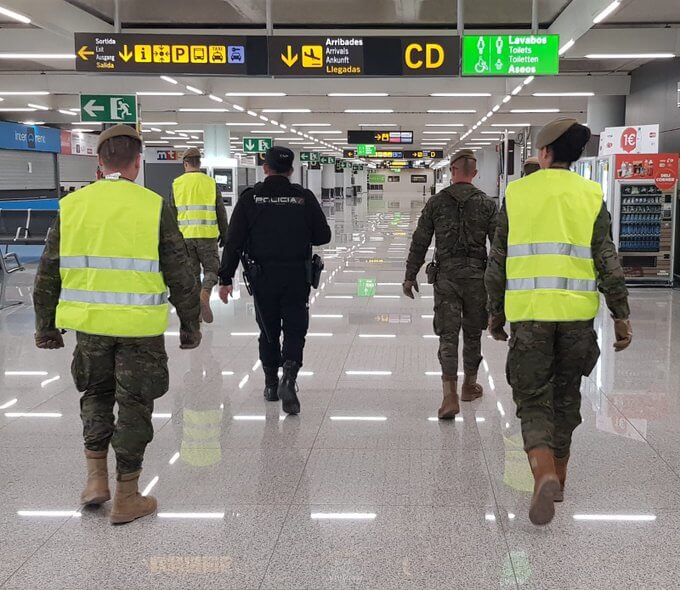 Police in Mallorca arrested 12 passengers and were still seeking 12 others on Saturday, after 21 people fled a plane during an emergency landing in an ‘unprecedented’ incident possibly linked to illegal immigration.

The incident of ‘unauthorised disembarkment’ that is under investigation occurred late on Friday after an Air Arabia flight from Casablanca to Istanbul made an emergency medical landing at Palma de Mallorca, one of Spain’s busiest airports, in order to attend to a passenger who had reportedly been taken ill. When the plane landed, 21 people forced their way off, prompting security officials to temporarily close the airport.

A government official on the Balearic Islands, Aina Calvo, said 12 people had been detained by police and were in custody. Those included nine who illegally left the plane, the person who was said to be sick, the person’s companion, and a person who was arrested for fighting with an official on the plane. On Saturday, 12 more were yet to be found.

‘Such events have never taken place before at any airport in Spain,’ said Calvo, calling it ‘unprecedented’.

During the evacuation, 21 passengers got out of the plane at around 7pm on Friday evening and ran onto the runway, Calvo explained, prompting a massive police search that forced the closure of the airport until around midnight.

Another person was arrested for ‘insults and aggression’ inside the plane, raising to 24 the total number involved in the incident – most of them Moroccans except for one ‘who we believe is Palestinian’, she said.

Investigators were examining ‘whether what happened at the airport was an orchestrated, planned event or an isolated incident’, Calvo said. ‘At this stage we do not have any information that allows us to confirm that this was an orchestrated operation … or part of a pre-determined plan. But the investigation is still open.’

Police had earlier said that a passenger ‘apparently suffered a diabetic coma and was taken by ambulance to hospital with a companion’, but that on arrival was found to be fine and discharged. However, ‘he was arrested on suspicion of encouraging illegal immigration and violating Spanish immigration law’, a police statement said, noting his companion had fled.

Investigators are considering the hypothesis that the passenger who provoked the emergency landing was not actually ill.

Those that fled the plane would be prosecuted for non-compliance with air safety regulations and irregular entry into Spain, and would be deported to their country of origin, Calvo said. None of them had applied for political asylum, she added.

Will this incident change the laws,regulations, instructions and recommendations of @IATA @ICAO @ACIWorld #Spain|The police suggested that the operation was "orchestrated" (Palma de Mallorca) and a mass escape. They watched the moment 20 Moroccans escaped pic.twitter.com/LKxGr44O78