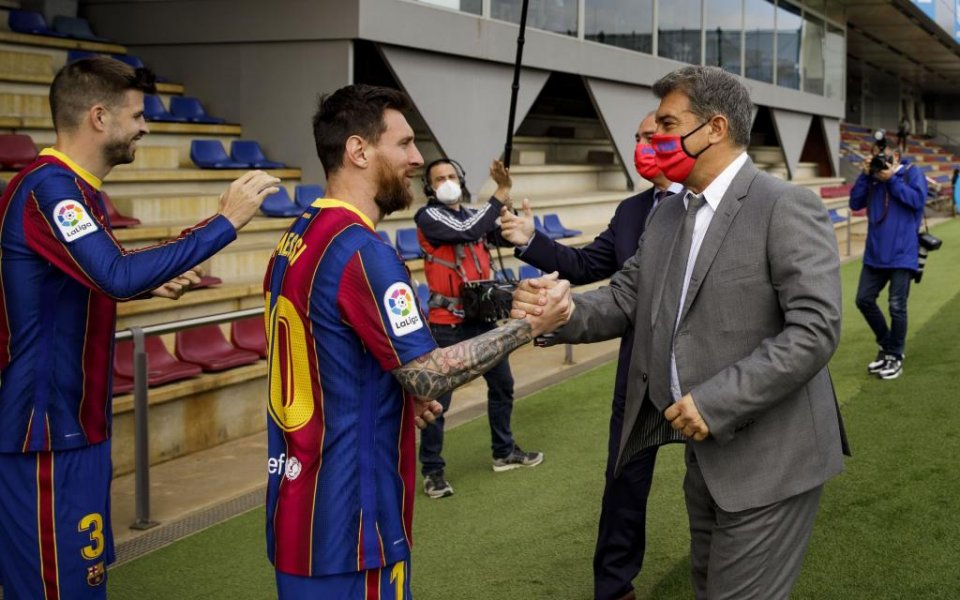 FC Barcelona president Joan Laporta has maintained his support for the European Super League, despite the rapid exit of 10 of the 12 founding clubs from the elite breakaway competition. He has also stipulated that Barça’s members will have the final word on whether the club takes part in the Super League.

The Super League, which provoked a backlash by other clubs, fans and authorities across Europe, was announced by a dozen top clubs in England, Spain and Italy on Sunday, but it quickly collapsed and is now officially backed only by Spanish clubs Barça and Real Madrid.

‘It is absolutely necessary,’ Laporta said on the Catalan public broadcaster, TV3, in his first public comments regarding the project. ‘The biggest clubs create the most financial resources and we must have our say in deciding how the earnings are shared.’

Laporta’s comments come as Barça face debts of around one billion euros, with €700 million due to be repaid this year.

Despite saying he’s in open dialogue with UEFA, Laporta still signed off on the Super League that was announced leaving European football’s official organising body in the dark about a deal that also cuts them out of the picture.

‘We need more resources to make this a great show. I think there will be an understanding,’ the Barça president said. ‘There has been pressure on some clubs [to pull out], but the proposal still exists. We make very important investments, salaries are very high and all these considerations must be taken into account, also taking into account the sporting merits.’

However, Laporta signed off on the Super League deal only after adding an extra stipulation to his agreement – that the club members would have the final say in what the club did.

This was also confirmed by UEFA president Aleksander Ceferin speaking to Slovenian media on Thursday. ‘They’ve all disappointed me, but Barcelona the least,’ Ceferin said.

‘Laporta was elected as president less than two months ago, so he’s not been able to do much. The contract he signed leaving the final decision to the members was very smart.’ Ceferin also explained that the Barça chief spoke to him about the financial difficulties his club are facing, leading to intense pressure at the Camp Nou.

On Monday, Spain’s La Liga had quickly issued a statement to strongly condemn the proposal of ‘a breakaway, elitist European competition that attacks the principles of open competition and sporting merit which are at the heart of the domestic and European football pyramid’.

The Spanish league said that the newly proposed European competition ‘is nothing more than a selfish, egotistical proposal designed to further enrich the already super rich. It will undermine the appeal of the whole game and have a deeply damaging impact on the immediate and future of La Liga, its member clubs, and all the entire footballing ecosystem’.

The six English clubs involved in the competition — Liverpool, Manchester United, Arsenal, Chelsea, Manchester City and Tottenham — all pulled out during Tuesday amid escalating backlash from their supporters and also warnings from the UK government. On Wednesday, Spanish club Atlético de Madrid and the three Italian teams in the project — Juventus, AC Milan and Inter Milan — also pulled out.

Despite being left virtually alone, Real Madrid’s president Florentino Pérez — who is also the Super League’s supposed first chairman — said late on Wednesday that the idea was not dead, but rather on standby.

Both Juventus and AC Milan left open the possibility of joining a Super League at a later date in their statements on Wednesday.

FC Barcelona’s finances have been hard hit by the Covid-19 pandemic, which has exasperated existing problems in a budget that was already loaded by the highest salary bill in football last season. The 12 elite clubs wanted to boost their revenues by cutting UEFA out of the equation and replacing the Champions League with the new tournament of 20 teams, including 15 teams who would always play in it.

Barcelona’s participation has been conditioned by Laporta’s pledge to let the club’s members vote on the proposal.

‘We are keeping a prudent stance,’ Laporta said on Thursday. ‘It is a necessity, but our club members will have the final word.’