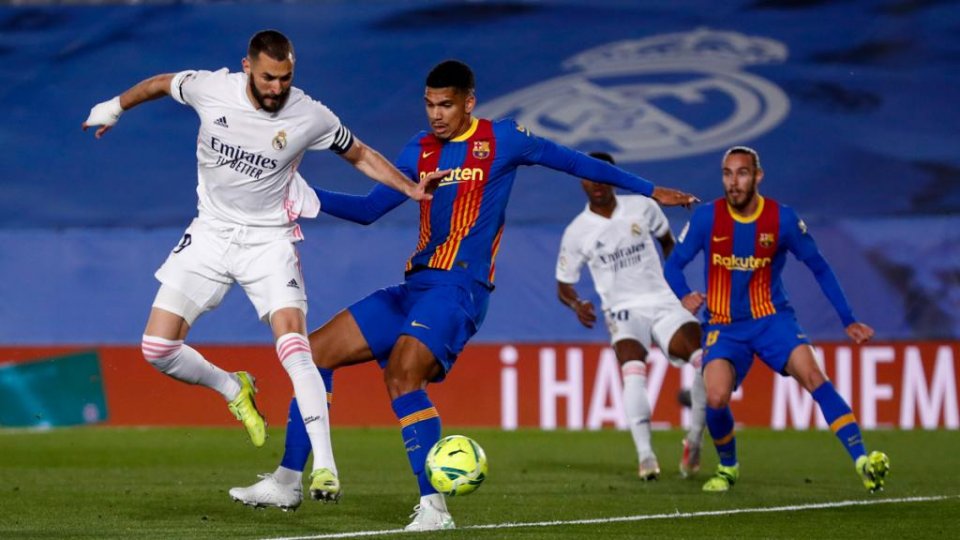 Real Madrid won El Clásico on Saturday evening, to leapfrog their title rivals Barcelona and move to the top of the table, albeit momentarily.

The rain in Spain fell mainly on the Alfedo di Stefano stadium throughout the 90 minutes with Karim Benzema breaking the deadlock after just 13 minutes. The forward’s ninth goal in his last last seven appearances was a stand-out finish, not only because of the occasion but also because of the skills involved.

Benzema cheekily but artistically flicked the ball into the back of the net with the sole of his foot, with just a single touch, that met the end of a cross from Lucas Vazquéz.

On the 28th minute, Real Madrid had luck on their side when a free-kick from Toni Kroos took two horrible deflections before beating the helpless keeper to extend Real’s lead.

Óscar Mingueza got the Catalans back into the game with a simple tap-in with half an hour left on the clock, but neither side were able to find the net again despite a number of clear chances falling to both sides.

It was a game that, judging by the chances either side had, could have gone either way. But the fact that Real Madrid only managed to have 31% of the possession at their home ground, certainly made them look more reminiscent of their local rivals Átletico than any of the famous Real Madrid sides of the past.

Their defensive, counter-attacking set-up was more indicative of a side who accept that they don’t have all the tools on the box to outplay their opponents and, therefore, will try not to lose first and foremost.

Casemiro was sent off in the 90th minute, being shown a second yellow for a foul on Vazquéz, and shortly after, Ilaix Moriba hit the bar from close range in the dying moments.

But Real Madrid got over the finish line scrappily to record their third consecutive El Clásico win for the first time since 1978, and go top of the league on goal difference, at least for one day.

Atlético Madrid still had a game to play, away to Real Betis – a Sunday evening fixture that finished in a 1-1 draw after Yannick Carrasco’s 5th minute opener was cancelled out by Chrstian Tello’s 20th minute equaliser.

The weekend’s results mean that there are now just two points between the top three sides in La Liga with only eight games to go. Barcelona are on 65 points, Real Madrid on 66 and Atlético on 67, still just about clinging to their lead.

The proximity of these sides means that every game left will be like a cup final with no one being able to afford any slip-ups.

Midweek in the UEFA Champions League, Real Madrid got off to comfortable quarter final first leg by beating Liverpool 3-1. Despite having their two strongest centre-backs out for the tie, Real Madrid’s stand-in defensive pairing of Nacho and Éder Militão put on an impressive performance against Liverpool’s attacking flair.

Vinícius Júnior was first off the mark for the Madrileños, firing in a low drive after receiving a beautifully delivered long-ball from Toni Kroos. Marco Asensio made it two, less than ten minutes later, after capitalising a mistake from Trent Alexander-Arnold to score from close-range.

Despite getting back into game, early in the second-half, via a Mo Salah strike that went in off the bar, Vinicious killed of Liverpool’s hopes by finishing off a classy attacking move from the competition’s record winners.

In the Europe League, the other Anglo-Hispanic tie of the week saw Granada lose 2-0 at home to Manchester United.

Marcus Rashford put the Red Devils in front after 31 minutes, neatly collecting a pass from Victor Lindeloff and then slotting the ball in past Rui Silva.

The scoreline remained unchanged unti the 90th minute when Bruno Fernandes was brought down inside the box, winning a penalty that none other than the Portuguese playmaker himself stepped up to take with the outcome never in doubt.

A fight in ‘Can Perico’ requires police intervention and medical assistance