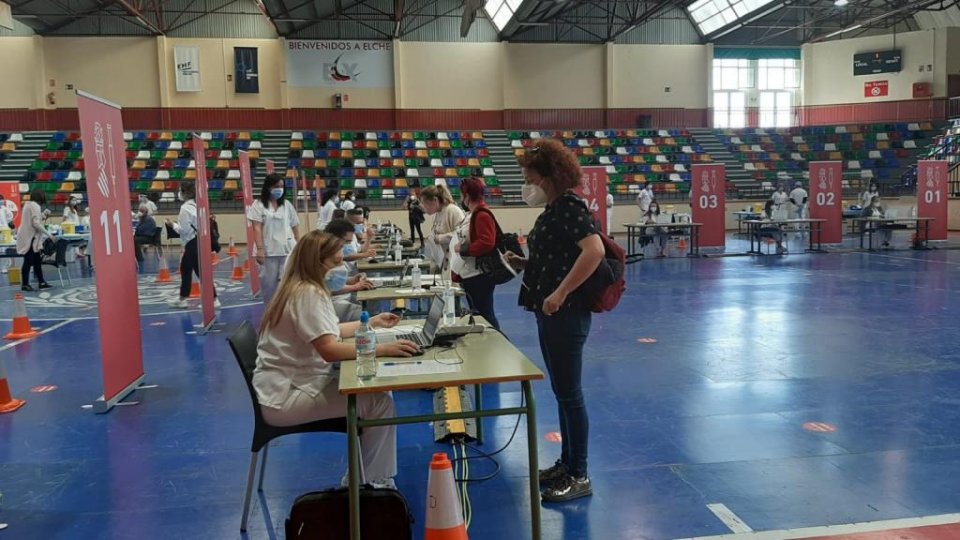 The word on everyone’s lips at the moment is vaccination: when will I get it? What do I have to do? Where do I have to go?

As promised, the vaccination roll-out will continue this week in the Valencia region, with a further 224,000 doses to be given between 5-11 April, and the region is set to pass the million doses administered in the coming days. Specifically, 120,000 doses of the Pfizer vaccine will be administered to over 80s and those aged 79 and 78. The other large group to be vaccinated this week, some 91,500 Valencians aged 64 and 65, will be given the AstraZeneca jab. On Friday, the Valencian health department issued advice for those born in 1956 and 1957, stating that those scheduled for a vaccination on 6-7 April would be contacted by SMS:

Valencian Health minister Ana Barceló, talking to the EFE news agency, said that the region’s ability to vaccinate depends on the supply of vaccines, but that to reach July with 70% of the region’s population vaccinated ‘would be a success’ and she hoped to reach 100% by the end of the year. ‘We need all the vaccines which are available on the market,’ she said, and warned that the British variant of Coronavirus now accounts for 70% of all cases in the region, with that figure growing by 10 points each week.

A further 50,000 teachers and school staff were vaccinated this week, bringing to a close the mass vaccination of teachers with AstraZeneca, which has been swift and well organised. From Monday to Friday, I am a teacher of secondary students, and as such I fall into this category, so on Maundy Thursday (as it so happened also April Fool’s Day this year), I found myself at the Llíria vaccination centre.

There was no queue, and I was rushed through without time to stop and chat. With so many people being vaccinated, I had imagined hours of waiting, with time to worry about all the things that could go wrong. But no, this was organised with military precision. For some inexplicable reason most of my colleagues had decided to arrive absurdly early, which meant they had all been vaccinated and were already in the post-jab recovery area.

In the reception section I was asked if I had taken any ‘anti-coagulants’ and I had to confess that after hearing so much about blood clots associated with the AstraZeneca vaccine, I had taken aspirin as a precaution. I received a scolding look from the nurse and a yellow sticker on my form but was ushered through anyway.

One of several police officers at the centre told me to wait outside a booth and within two minutes I was vaccinated. We then had to wait at separate seats for 15 minutes, supposedly pressing something onto the site of the jab in our arm, although I didn’t receive any instructions to do so, or a piece of cotton wool to hold there. After 15 minutes of not pressing my upper arm, I was then free to leave and chat outside with my colleagues. All the over-excited, now-on-holiday teachers were busy congregating in groups of more than four for a natter. More used to giving orders than receiving them, they had to be told to disperse by police officers.

The advice with AstraZeneca is to take paracetamol every 8 hours, if necessary. I would recommend anyone receiving the jab to have a packet on hand and not to plan anything too taxing for a couple of days afterwards. While symptoms can vary a lot, I had slightly aching limbs, was very shivery, couldn’t get warm, before later waking up with a temperature. Some colleagues even reported vomiting and headaches are also common, although mine was only slight. I was, however, very tired, although that could equally have something to do with getting to the end of another Covid-term at school.

Three days on and I’m pretty much back to normal, resurrected in time for an Easter egg hunt in the garden. Although I still don’t fancy a glass of wine or even a cool beer, which may not be an altogether bad thing!

Face masks obligatory on the beach

The introduction of new rules from the central government in Madrid, means that it is now compulsory to wear face masks on the beach or in the countryside even when social distancing can be maintained. In theory we should now be wearing face masks going for a walk on an empty beach, or in an open field with nobody around, regardless of the infection rate in our region. In Valencia the rate is currently below 30 per 100,000 inhabitants.

During the interterritorial health meeting last Wednesday [31March], Ana Barceló proposed that beachgoers be exempt from wearing face masks when they are able to maintain a safe distance from other people or while swimming. However, Barceló, along with president Puig, insisted that ‘whatever the norms, people must comply with the recommendations and norms set out by the health authorities’ and that ‘good [infection] numbers can never lead to a relaxation of complying with the measures’.

Meanwhile in Benidorm, a team of 40 beach helpers have been on hand since 1 April to advise and inform beachgoers about the safety rules. The city’s beaches have been divided into plots of 4×4 metres since the start of March, and everything is being put in place following the ‘safe beaches’ model that worked so well last year, said mayor, Toni Pérez.

Real Madrid player Marcelo Vieira has reportedly been fined €2,700 after he posted a photo on Instagram of himself and his family at Valencia’s Malvarrosa beach last weekend.

The Brazilian footballer had not only broken the regional border closure, but he and all his family were photographed on the beach front promenade without face masks. According to EFE, the fine issued was €600 per family member for breaking the perimeter closure, plus €100 each for not wearing a face mask, except for one of the children who is below the age of its obligatory use.

Health chief Barceló remarked that ‘he must abide by the rules like any other person, there are no differences, the restrictions are set equally, for everybody’. While for most people €2,700 would be quite a dent in their bank balance, for an international footballer it will be a drop in the ocean.

As of yesterday, there were 385 people in the region’s hospitals, lower than last week’s 450, while those needing intensive care treatment was also down at 88, compared to last week’s 100.

Hi,
You have reported the age groups that are having or have had their injections, but there is no mention of the age group 65 to 79? can you please let me know? I am 70 in July and my partner is 78 in May. We have not been informed of anything.
Kind Regards
Paul & Ann

Why nobody in our age group between 70-79? No details AT ALL

Hello,
In answer to your questions, I understand that those in their 70s will be called in the coming days, working backwards in age order from 79. And it will be the Pfizer or moderna vaccines.
Personally, I think it’s awful that my 79-year-old mother-in-law has yet to be vaccinated while, at 45, I have been. I would happily have given her my place. Unfortunately Spain has chosen to use AstraZeneca only with 65s and under.
The result is that 66 to 79 year olds are the ones being left behind
I hope this helps. Fingers crossed that you all get called soon.
Catherine