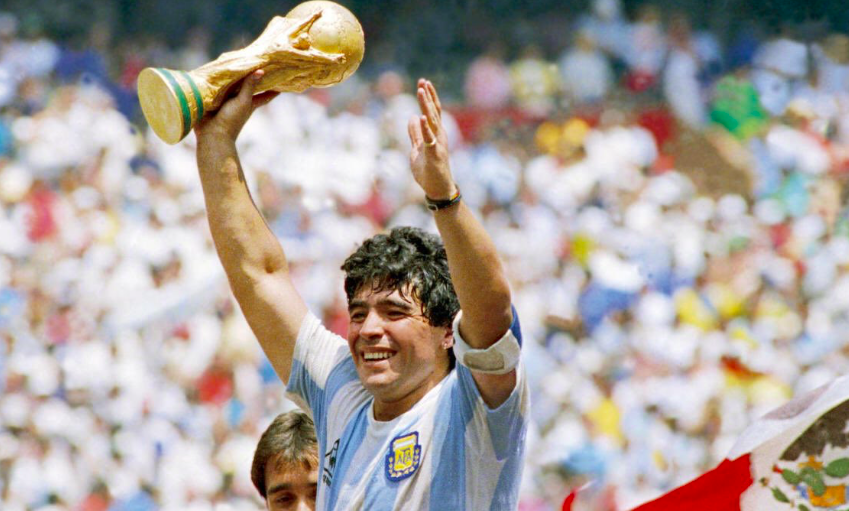 News that the Argentine football legend Diego Maradona has died of a heart attack at the age of 60 has sparked tributes from all over the world, with fellow footballers, coaches, club owners and politicians all wanting to pay their respects. Argentine President Alberto Fernandez has declared three days of national mourning.

The news of Maradona’s death came hours after he had left a hospital in Olivos, Argentina, following surgery to remove a blood clot on his brain.

Alongside Brazilian footballer Pele (now aged 80), Maradona was regarded as one of the greatest football players of all time. His biggest glory came when he captained Argentina to win the World Cup in 1986, only to later be kicked out of the 1994 World Cup for doping.

Maradona was largely responsible for Argentina’s 1986 victory in Mexico, scoring two famous goals in one game against England in the quarter-finals, to win 2-1. The first goal was a notorious goal scored with his fist. ‘It was partly by the hand of God and partly with the head of Maradona,’ he later said. The second goal, however, where he dribbled past half the England team, is often referred to as the goal of the century.

Pele posted a message on Instagram, just minutes after news of Maradona’s death broke. ‘Sad news today. I have lost a dear friend, and the world has lost a legend,’ he wrote. ‘There is much more to say, but for now may God give his family strength. One day, I hope, we will play football together in the sky.’

Former England player Gary Lineker wrote on Twitter: ‘By some distance the best player of my generation and arguably the greatest of all time. After a blessed but troubled life, hopefully he’ll finally find some comfort in the hands of God. #RipDiego.’

Italian football club Napoli, where Maradona played from 1984-1991, issued a statement calling his death a ‘devastating blow’ for both city and club: ‘We are in mourning. We feel like a boxer who has been knocked out. We are in shock. Always in our hearts. Ciao Diego.’

Fellow Argentine and Barça star Lionel Messi – who has often been compared to Maradona – wrote on Instagram: ‘This is a very sad day for all Argentines and for football. He has left us, but he hasn’t gone, because Diego is eternal.’

Maradona was born on 30 October 1960 in the Buenos Aires working class suburb of Lanus. He was the fifth of eight children of a factory worker, and grew up in the Villa Fiorito shanty town. His ‘rags-to-riches’ rise to stardom finally gained him an iconic status equivalent to fellow Argentines Che Guevara and Evita Peron.

His footballing skills were discovered during street kickabouts by a scout for the first division club Argentinos Juniors, with Maradona making his league debut at the age of 15. At 17 he just missed inclusion in Argentina’s 1978 World Cup-winning squad at home. In the 1982 tournament in Spain, a sending-off against Brazil was followed by two seasons at FC Barcelona, yet marred by hepatitis and injury.

In 1984, however, he moved to Napoli on a $7.5 million contract – a world-record at the time. He helped them win the Italian title twice. After the 1986 World Cup triumph in Mexico, he then led a mediocre Argentine team to a second successive World Cup final in Rome in 1990.

By 1991, however, drugs and alcohol began taking over Maradona’s life. He received a 15-month suspension from football worldwide for doping and was even called to trial in Naples over alleged links with a vice ring. He was then banned again for 15 months after testing positive for drugs at the 1994 World Cup in the USA.

Years of drug use, overeating and alcoholism finally curtailed his playing career, and he nearly died of cocaine-induced heart failure in 2000. In 2008, he then returned as coach of the Argentina team, despite having had no coaching experience.