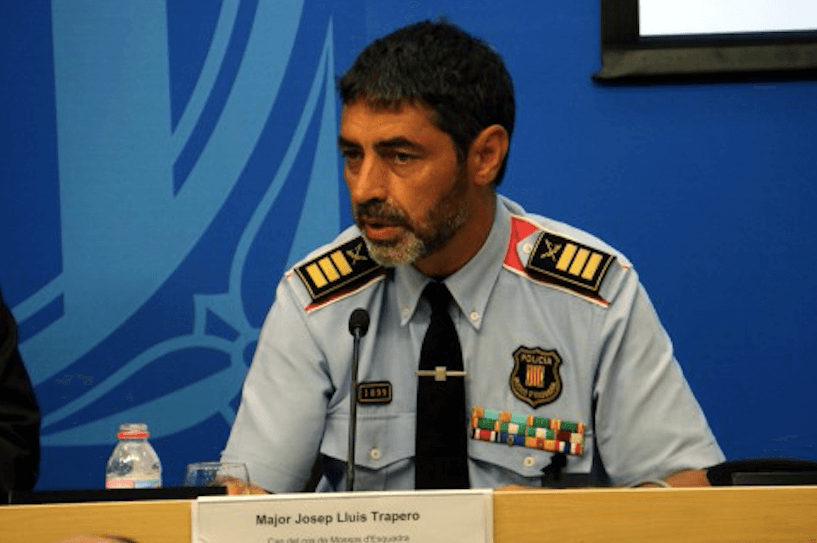 Josep Lluís Trapero has been reinstated as the head of the Catalan police force (the Mossos d’Esquadra).

Trapero was acquitted of all charges last month by Spain’s National Court. He had been accused of sedition, disobedience and aiding the Catalan independence bid because of an alleged lack of police action in preventing the 1 October 2017 referendum, as well as against protests during Spanish police raids in Barcelona on 20 September 2017. Prosecutors had sought 10 years in jail for the Mossos chief.

The Mossos d’Esquadra, led by Trapero, had been criticised for being too lenient and taking insufficient measures to stop the voting taking place in October 2017.

During the trial, Trapero had said he had tried to follow Spanish court orders to prevent the voting, but that it was impossible for 7,800 Mossos officers dispatched throughout Catalonia to stop 2.3 million voters. He even said that, ‘the three police forces [Mossos, Guardia Civil and National Police] did not have enough resources’.

Trapero had been the highest ranking police officer in Catalonia until he was removed from his post on 28 October 2017, after the Spanish government under Mariano Rajoy imposed direct rule on Catalonia under Article 155. Trapero had previously been highly praised for his police force’s swift actions following the 2017 terror attacks that had taken place in Barcelona and Cambrils, and which left 16 dead and over 140 injured.

A manhunt had followed the attack on La Rambla boulevard in Barcelona on 17 August 2017, after a van was driven at speed by Younes Abouyaaqoub. He was shot dead by police four days later. The next day, during another attack in Cambrils, five other jihadists were shot dead by the Mossos police.