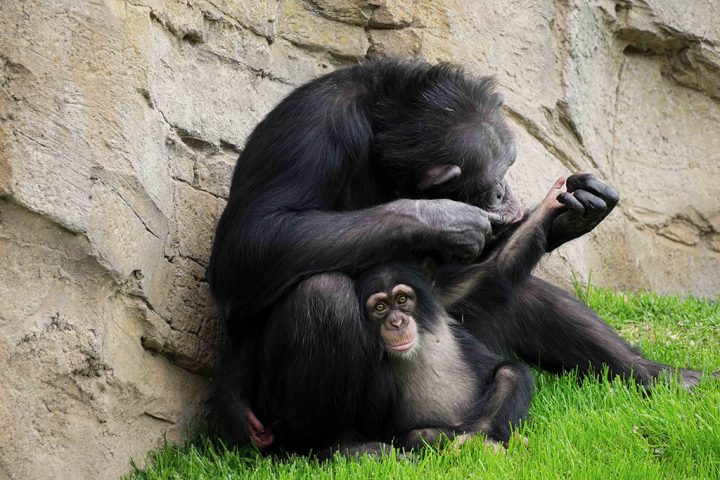 A baby chimpanzee who was rejected by its mother has found a new mum and been integrated in a group of other chimps at Bioparc Valencia.

It is a triumph for his carers, given that he carries the genes of his subspecies which is in grave danger of extinction.

Djibril, a West African chimpanzee, was born in April 2019 at the Bioparc Fuengirola, but his mother, Kika, rejected him.

Kika had been captured in the wild as a baby, after her own mother was killed. She then suffered continued physical and psychological abuse as a photographic prop in a circus before being rescued by Spain’s Guardia Civil.

After numerous failed attempts to persuade Kika to accept her baby, the search for an adoptive mother began.

A female, Malin, was found at the Bioparc Valencia and in July 2019 Djibril arrived and began his long and ‘dangerous’ period of gradual adjustment.

He was accompanied 24 hours a day using techniques to minimise ‘humanization’ and gradually introduce him to his future adoptive mother – but unfortunately Malin showed no interest in the new arrival.

However, another female, Eva responded to the baby and after careful management of the situation and taking into account the social structures of the group, Djibril was ‘adopted’ by Eva and eventually the two were re-introduced to the group and Djibril can now be seen playing with other chimps in the park.

Djibril’s success story, and his mother coming from the wild, means there’ll be a future reproductive male to revitalise the gene pool of West African chimpanzees in captivity.

Critically endangered, the West African chimpanzee is a sub-species of the common chimpanzee and is on the IUCN’s (International Union for Conservation of Nature) ‘Red List of Threatened Species’. In 2016 there were an estimated 21,300 to 55,600 individuals in the wild.

The Fundación Bioparc supports the Nandoumary Project of the Jane Goodall Institute in Senegal which is managing to recuperate and conserve the natural habitat of the subspecies and the groups of chimpanzees that live there.

The Valencia Bioparc said: ‘The union of both forces gives new hope to the future of West African chimpanzees in a palpable example of the importance of the two pillars on which Conservation is based today.’

You can watch Djibril’s story here:

Click here for all our reports from the Valencia Region.