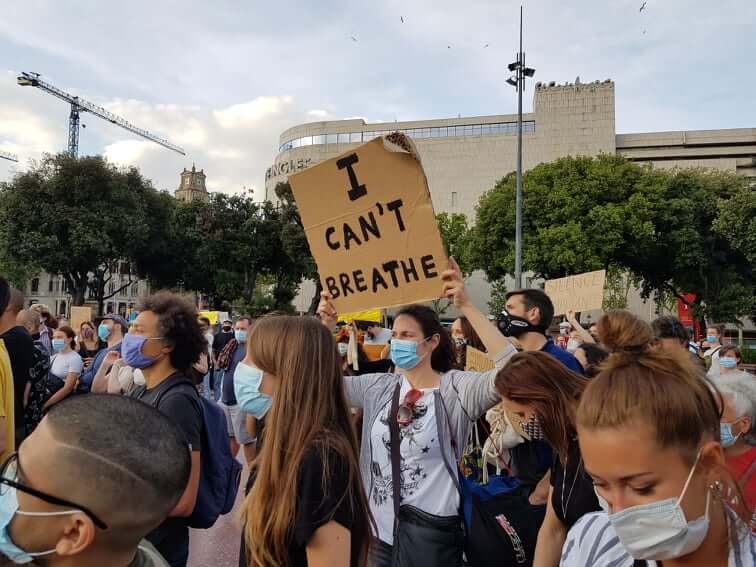 Two weeks after the death of George Floyd in the USA at the hands of the Minneapolis police, cities and towns across Spain have been joining in the wave of global protests and vigils to mourn his death and denounce racism.

Protests have been held in many cities across the world, despite the authorities seeking to discourage large gatherings to curb any further spread of the Coronavirus pandemic.

George Floyd died after a white police officer in Minneapolis pinned him to the ground with his knee on his neck for nearly 10 minutes on 25 May – the latest unarmed black citizen to be killed by white law enforcement officers in the United States.

A video of the incident with Floyd pleading for his life and saying ‘I can’t breathe’ sparked widespread protests across the USA, from New York to Los Angeles – and which included rioting and looting in some US cities.

Washington DC later became the epicentre, with thousands of protestors flooding the streets surrounding the White House during the week.

In Madrid on Sunday 3,000 people took part in a protest outside the United States Embassy – one of many other protests taking place across Spain.

According to local police in Barcelona, around 3,000 people also demonstrated there from 11am on Sunday morning, in and around Plaça Sant Jaume. The square is where the headquarters of both the Catalan government and Barcelona City Council are located.

Another vigil had been held in Barcelona’s Plaça Catalunya on Thursday – and where some of the photos in this report were taken.

The anti-racism demonstrations in Spain were organised by a number of different associations, including the Black, African & Afro-descendant Community in Spain (CNAAE).

‘We see how [institutional racism] undermines black lives both directly, with the physical assassination, and indirectly, with structural poverty, the exploitation of our labour, and the lack of opportunities we experience in different parts of the world,’ read the manifesto of CNAAE.

Amid the Coronavirus pandemic and current ‘state of alarm’ in Spain, the protest outside the United States Embassy in Madrid had been initially authorised by the Spanish government’s delegation in Madrid for a maximum of 200 people.

In the end, with the 3,000 crowd exceeding the authorised limits, protestors marched from the USA embassy towards Puerta del Sol square – but it was impossible to adhere to all the social distancing measures.

Many of those rallying in Madrid held ‘Black Lives Matter’ placards to demand racial justice, and shouted, ‘I can’t breathe’ – George Floyd’s last words caught on video in Minneapolis. It has become one of the slogans of all the protests.

The Spanish government’s delegation in Madrid tweeted on Sunday afternoon that 3,000 people had taken part in the demonstration in front of the United States Embassy in the city on Sunday, ‘without any incident and with total normality, thanks to the work of the police’.