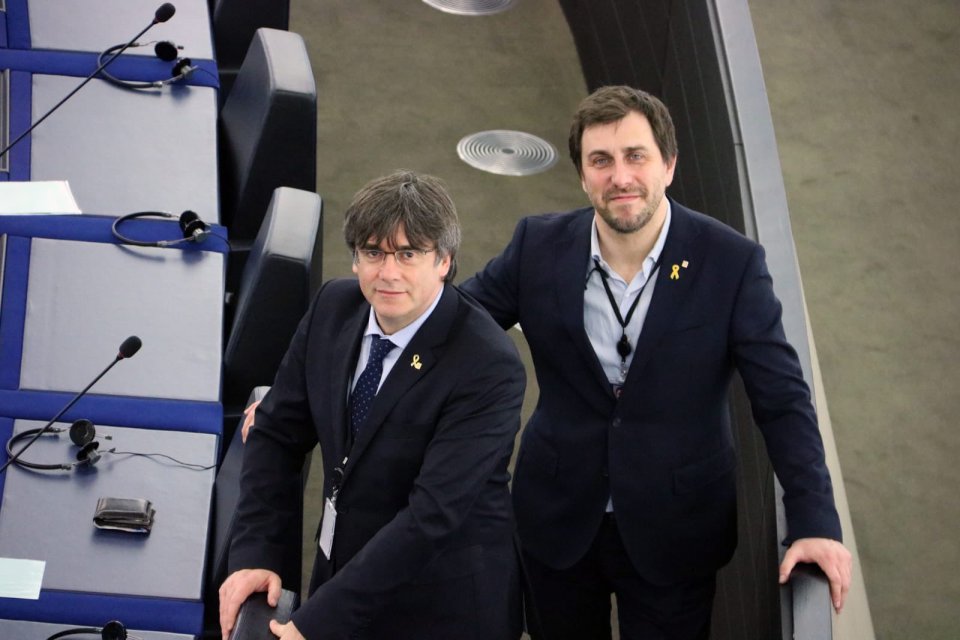 Former Catalan president Carles Puigdemont and his former minister Toni Comín made their debut as MEPs in the European Parliament on Monday, just over seven months after winning their seats in the 26 May 2019 European elections.

As the plenary session got underway in Strasbourg, the EU Parliament president David Sassoli formally told all MEPs of the exiled Catalan pro-independence leaders’ presence in the chamber.

Sassoli explained that due to the 19 December ruling by the Court of Justice of the European Union (CJEU) on the immunity of jailed former Catalan vice-president, Oriol Junqueras – who had also been elected as an MEP – the three men had been MEPs since 2 July 2019.

However, Sassoli also added that Junqueras had since had his mandate and status as an MEP terminated after his conviction in the Catalan Trial, and following the recent rulings by the Spanish Electoral Authority (JEC) and Spanish Supreme Court.

Puigdemont and Comín, assigned to the EU parliament’s group of non-attached members, carried signs into the chamber calling for Oriol Junqueras to be released.

Before entering the chamber, Puigdemont talked to the media about the more than two years he has spent in exile after being ousted from the Catalan presidency.

‘We’ve overcome two years of obstacles aimed at preventing us from doing politics,’ he said. ‘A lot of resources have been spent in order to prevent us from being here.’

ALSO READ: All Spanish MEPs able to take oath in Madrid … except three

Puigdemont and Comín were among a number of former Catalan ministers who went into exile in Belgium after the Spanish authorities imposed direct rule on Catalonia in 2017.

On Monday, Puigdemont had a message for Brussels: ‘Today we can say that the Catalan crisis has impacted the EU’s pillars. The EU can’t continue to look elsewhere,’ he said.

The former Catalan president also mentioned Junqueras, who was stripped of his MEP status on Friday, saying his former vice president should have been allowed to attend Strasbourg.

Junqueras was among those ministers who stayed in 2017, and who were arrested, tried for the independence bid, and sentenced to hefty prison sentences by the Supreme Court on 14 October 2019.

Junqueras also gained election as an MEP in the May 2019 election, but was prevented from taking up his seat by Spain’s judiciary while in provisional detention.

In December, the EU court ruled that he should have been allowed to attend the European chamber as an MEP-elect and confirmed his parliamentary immunity.

Yet, Spain’s Supreme Court argued that his conviction in October meant he had no right to freedom or immunity, and so the EU chamber stripped him of his MEP status on Friday.

A few hundred pro-independence supporters joined the current Catalan president Quim Torra, the Catalan Parliament speaker Roger Torrent in Strasbourg on Monday to give their support to the two Catalan MEPs.

Torra called it ‘a day of celebration’, adding that ‘we are Europeans and we want to be here, where the important issues of Europe are decided’. Torra also made reference to Junqueras, saying ‘we will do everything necessary for him also to be here’.

Meanwhile, the European Parliament said on Monday afternoon that it had received an appeal from Spain’s Supreme Court requesting that the chamber waive the parliamentary immunity of Puigdemont and Comín.

The EU chamber spokesman, Jaume Duch, told the media that the court’s request arrived soon after the two former Catalan government members had entered the chamber, and included with it was the court’s verdict on the referendum trial.

While Duch confirmed that the request had arrived, he said it would not be officially announced during the current plenary session, as it must first be studied in detail. ‘We will take the time necessary to do things well,’ said Duch.