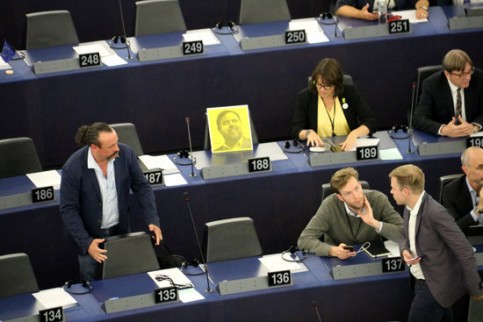 Oriol Junqueras, the jailed former Catalan vice-president, has been elected president of the European Free Alliance (EFA) group in the European Parliament.

Alongside former Catalan president Carles Puigdemont and former minister Toni Comín, Junqueras has recently been officially recognised as an MEP by the European Parliament – despite Spain’s Electoral Authority (JEC) ruling last Friday that he would not be allowed to receive his accreditation as an MEP.

As president of the EFA group, Junqueras succeeds the SNP MEP Alyn Smith who was elected to the British Parliament at the December UK General Election.

Junqueras has so far been prevented from travelling to the European Parliament due to his detention by Spanish authorities following his 13 year sentence in the Catalan Trial verdict.

Fellow EFA MEP François Alfonsi said, ‘We are looking forward to welcoming Oriol Junqueras to Strasbourg next week to take up his seat as an MEP and assume the Presidency of the EFA Group.’

‘Oriol Junqueras has been an MEP since June 2019 and enjoys immunity as such. It is a disgrace that he has been prevented from taking up his democratic mandate for so long, effectively disenfranchising those Catalan citizens who voted for him. The behaviour of certain elements of the Spanish state throughout this process has been shameful.’