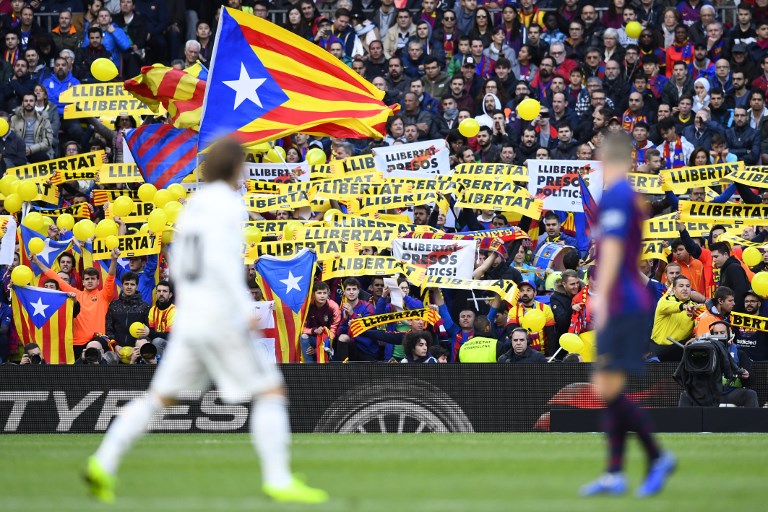 Over 3,000 security guards will be deployed for today’s El Clásico match between FC Barcelona and Real Madrid, following the plans of the pro-independence protest group Tsunami Democràtic to stage a ‘massive’ protest in the vicinity of Camp Nou.

Eduard Sallent, the chief commissioner of the Catalan police (the Mossos d’Esquadra), has said that the security will be made up of 1,000 Mossos agents, whilst 2,000 will be private security guards.

‘The operation will ensure that El Clásico is played normally,’ said Sallent. He also said that the security personnel are preparing for a pitch invasion as the ‘worst possible scenario’ – and that is ‘not probable but it is possible’. For a pitch invasion, the spotlight would fall on the private security guards, but the Mossos agents would intervene if the situation became ‘especially serious’, in order to arrest any perpetrators.

Renewed fears of unrest had raised the possibility of the match being postponed for a second time – but the Catalan Interior Minister Miquel Buch also ‘guaranteed’ that the game will go ahead as planned.

‘It will be played, El Clásico will be played,’ reiterated the president of FC Barcelona, Josep Maria Bartomeu, last Thursday – and something repeated since by sports, political and police authorities in Spain.

‘We know we are living in a complex social and political situation but I am convinced that it is compatible with playing a football match,’ said Bartomeu.

The Tsunami Democràtic group of protestors was behind the shut down of Barcelona airport following the Supreme Court sentencing on 14 October of nine Catalan leaders to up to 13 years in prison. The same group then also blocked the AP-7 motorway on and near the border with France for two days after the 10 November general election.

El Clásico match has already been rescheduled from 26 October for security reasons surrounding the protests in Barcelona that were on-going during October after the Supreme Court sentencing.

The security deployment for the match will now make it one of the most policed sporting events in Spain’s history. El Clásico at Camp Nou in 2015 – which took place shortly after the terrorist attacks in Paris – had 1,100 police officers and 1,400 private agents working at it.

Last December the Copa Libertadores final, played in Madrid after clashes in Buenos Aires, had approximately 2,000 police officers working at it, with an additional 1,700 private security guards.

For Wednesday’s El Clásico, meetings have been taking place between the police, the two clubs and the Spanish Football Federation (RFEF) in order to ensure the safe arrival of the two squads and referees, as well as the nearly 100,000 fans expected to attend.

Tsunami Democràtic originally aimed to promote both ‘in the stands and on the pitch’ its slogan: Spain Sit and Talk – a call for dialogue between the Spanish and Catalan governments, and to negotiate a referendum for Catalan independence. But the precise details of their plans remain unknown.

‘The plans announced in advance are usually based on three things: expectation, surprise and execution,’ said the organisation on Saturday during an exchange of messages with the Catalan regional broadcaster TV3.

Whilst the Tsunami Democràtic group has insisted ‘it has not said it wants to block or suspend the game’, it has already announced plans to convene four different groups of people at the four corners surrounding the grounds of the Camp Nou. They quickly claimed that 18,000 protestors had confirmed their attendance at the demonstration.

Tsunami Democràtic called on people to gather from 4pm, with the game scheduled to kick off at 8pm.

Last week it was reported that FC Barcelona had been in contact with some members of Tsunami Democràtic, through the use of an intermediary. The club wanted to find an agreement with the protestors but the talks failed and amounted to nothing.

The security operation, therefore, is expected to be divided into two phases, beginning first in the build-up to the game, in the vicinity of Camp Nou, to ensure the safe arrival of the refereeing team and the players’ team buses, and to prevent demonstrations blocking entrances to the ground.

After this, focus will shift to the pitch and within the stadium once the game kicks off. In the stands, the number of private security guards will be increased to reduce the threat of pitch invasions that could interrupt the game.

Democratic Tsunami has previously received vocal support from former Barcelona coach Pep Guardiola. The Catalan club has historically had a close association with the independence movement, with Camp Nou often used as a setting for flags, banners and chants in support of the process.

After the sentencing of the nine Catalan independence leaders by Spain’s Supreme Court on 14 October, FC Barcelona issued a statement, stating that, ‘Prison is not the solution’