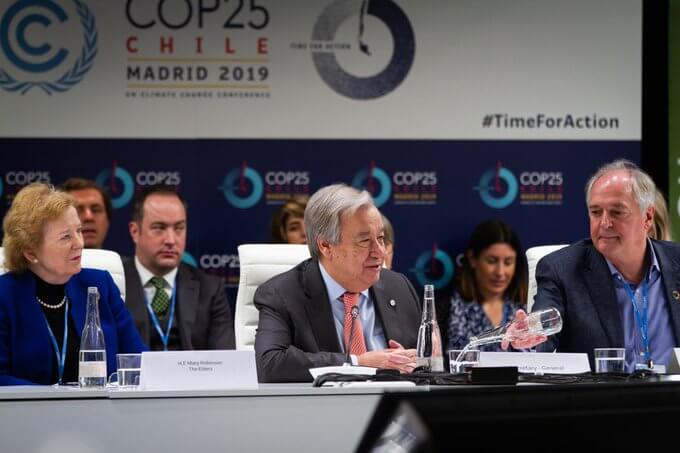 The UN Climate Change Conference, known as COP25, concluded in Madrid on Sunday, yet the UN Secretary-General Antonio Guterres called it a ‘lost opportunity’.

‘I am disappointed with the results of COP25,’ Guterres said. ‘The international community lost an important opportunity to show increased ambition on mitigation, adaptation and finance to tackle the climate crisis.’

‘But we must not give up, and I will not give up,’ Guterres added. ‘I am more determined than ever to work for 2020 to be the year in which all countries commit to do what science tells us is necessary to reach carbon neutrality in 2050 and a no more than 1.5 degree temperature rise.’

COP25 had been running for the past two weeks in Madrid. The Spanish government stepped in to host the event after its original host Chile withdrew due to riots over economic inequality.

In the end, the conference talks simply managed to deliver some compromises from countries over a global warming battle plan that fell well short of what science says is needed to tackle the climate crisis.

‘Today, the citizens of the world are asking for us to move ahead faster and better,’ Carolina Schmidt, Chilean environment minister and President of COP25, told the closing plenary.

But COP25 failed to deliver faster and better action.

Delegates from nearly 200 countries had come to Madrid with the aim of finalising the goals set out in the 2015 Paris Agreement, which enjoins nations to limit global temperature to below two degrees Celsius (3.6 Fahrenheit).

The delegates postponed a decision on global carbon markets, however, which put a price on the emission of carbon dioxide, the main greenhouse gas.

Carbon markets allow one country to pay another to reduce emissions and include this under its own targets, which experts say can drastically help reduce greenhouse gas.

Swedish teenage activist Greta Thunberg – named 2019 Person of the Year by TIME magazine – on Friday criticised world leaders for ‘still trying to run away from their responsibilities’ whilst demanding a ‘year of action’ in 2020.

With the Paris accord set to become operational next year, it had been hoped COP25 would show governments had been moved to action by the weekly protests by millions of young people, irrefutable science, and deadly storms and wildfires that marked 2019.

But the greater ambition – how far each country would be willing to slash carbon emissions or assist less wealthy nations to do likewise – largely failed to materialise.

The push for strengthening voluntary carbon cutting plans is led by small-island and least-developed states, along with the European Union.

These have called out nations they see as blocking consensus – notably the USA, Australia and Saudi Arabia.

China and India, the world’s No.1 and No.4 carbon emitters, have also made it clear they see no need to improve on their current emissions reduction plans, which run to 2030.

With the summit failing to deliver on its key ambitions, the focus now switches to next year’s COP26 in Glasgow, when the true Paris deadline falls.