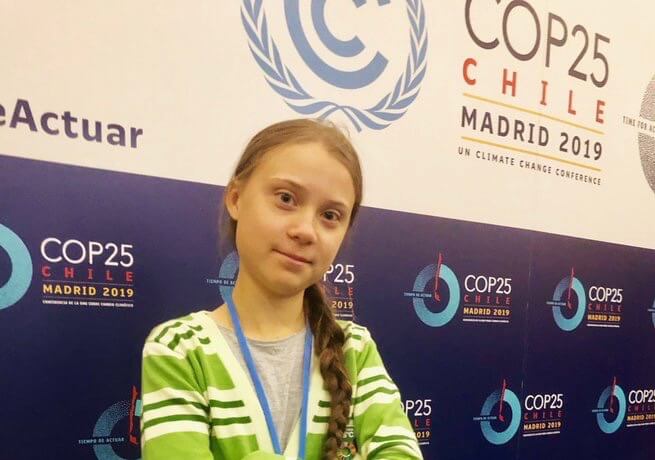 The Swedish teenager activist, Greta Thunberg, speaking at the COP25 climate conference in Madrid, has accused world leaders and CEOs of using ‘clever accounting and creative PR’ to make it appear as if they are taking firm action in the fight against climate change.

The UN Climate Change Conference, known as COP25, started in Madrid last week. The Spanish government offered to host the event after its original host Chile withdrew last month due to riots over economic inequality.

On Wednesday, the 16 year old Thunberg – who has also just been named as TIME Magazine’s 2019 Person of the Year – accused the wealthier nations of inventing ways to avoid cutting their greenhouse gas emissions, calling their climate action ‘misleading’ at the conference in Madrid.

Thunberg, who refuses to fly because of the carbon emissions involved, had been on her way to Chile when the COP25 venue was changed. She then headed back to Europe after being offered a ride on a catamaran. After arriving in Lisbon, she then made her way to Madrid for protests that took place on Friday 6 December.

‘I still believe the biggest danger is not inaction,’ she told delegates in Madrid on Wednesday. ‘The real danger if when politicians and CEOs are making it look like real action is happening when in fact almost nothing is being done apart from clever accounting and creative PR.’

Global leaders, activists and scientists from nearly 200 countries have been attending the two-week event in Madrid to review and finalise goals set out in the 2015 Paris Agreement.

Overshadowing the event this year are failures of past conferences to transform goodwill into real policy change, making the stakes at this year’s event even higher. UN Secretary-General António Guterres warned leaders of ‘a point of no return’.

A recent UN report has stated that even if greenhouse gas emissions are cut to meet the Paris Agreement levels, global temperatures will rise 3.2 degrees Celsius, exceeding the 1.5 degrees aim of the accord. Such a rise would be insufficient to avert the worst effects of climate change.

‘Countries are finding clever ways around having to take real action,’ said Thunberg, who started her one-girl climate strike in her native Sweden a year ago – but has since been catapulted to international stardom.

‘Recently a handful of rich countries pledged to reduce their emission of greenhouse gases by so and so many percent by this or that date, or to become climate neutral or net zero in so and so many years,’ she said.

‘This may sound impressive at first glance, but even though the intentions may be good this is not leadership. This is not leading, this is misleading.’

‘Our leaders are not behaving as though we were in an emergency,’ said Thunberg.

After Thunberg finished her address, many youth activists from around the world stormed the main stage in Madrid, demanding that delegates act now to cut emissions.

Pedro Sánchez asked by Felipe VI to form government – but can he?